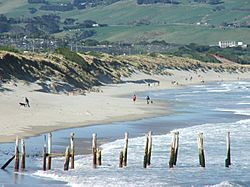 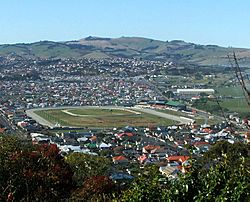 Looking across Forbury Park and southern Saint Kilda from the west. The large white building in the upper right of the picture is Dunedin Ice Stadium, with Marlow Park immediately to its right.

St Kilda is a suburb of the New Zealand city of Dunedin. A densely populated residential suburb, it lies on the southern part of the city's central plain, to the southwest of the head of the harbour and immediately north of Ocean Beach, parts of which (St Kilda Beach and Middle Beach) are within the suburb and form its major geographical feature. Saint Kilda's 2001 population was 5,904.

The suburb has fairly well-defined boundaries, having been a separate borough from 1875 until the time of local government restructuring in 1989. This borough was bounded by Forbury Road in the west, Bay View Road in the north, and Royal Crescent in the east, and at the time of its amalgamation into Dunedin City, was the most densely populated borough in New Zealand. Much of the borough's growth was between 1900 and 1930, during which time the population rose from around 1500 to 8000, slowly declining from that time to its current figure. Many of St Kilda's houses date from this period.

St Kilda was named for the Melbourne suburb by early property developer George Scott, who had arrived in New Zealand from Victoria in 1862. The area previously had the Maori name Whakaherekau.

St Kilda is surrounded by the suburbs of St Clair, Forbury, Caversham, South Dunedin, Musselburgh and Tainui. Other major streets in St Kilda include Prince Albert Road in the east (which contains most of the suburb's few shops), Queens Drive, Richardson Street and Victoria Road, the last of which runs along the southern shore, separated from the Pacific Ocean by wide high dunes. The Sir James Barnes Lookout is located close to the highest point of the dunes and commands views across the plain on which Saint Kilda lies and the surrounding parts of the city.

The streets of St Kilda form a grid pattern which is interrupted by a long crescent (Hargest Crescent), which runs around the original boundary of the city's main horse racing venue, Forbury Park (the park was reduced to its current size in 1909). The suburb also contains the Dunedin Ice Stadium, an Olympic-sized ice-skating rink and several sports fields, notably De Carle Park, Marlow Park, Kettle Park, and Hancock Park. Chisholm Park Golf Course also lies partly within Saint Kilda. Saint Kilda has three pubs, a bowling green, tennis courts, and a badminton hall. Though it contains no secondary schools, the paired single-sex King's and Queen's High Schools lie close to its northern edge.

All content from Kiddle encyclopedia articles (including the article images and facts) can be freely used under Attribution-ShareAlike license, unless stated otherwise. Cite this article:
St Kilda, New Zealand Facts for Kids. Kiddle Encyclopedia.