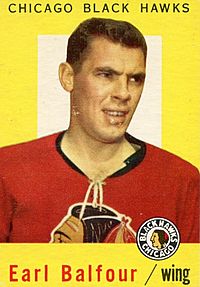 Balfour served as a forward from 1952 to 1961. He was a defensive forward and penalty-killing expert. Balfour won the Stanley Cup with the 1960–61 Chicago Black Hawks. He also played for the Toronto Maple Leafs. He retired after 288 games, posting 30 goals, 22 assists, 52 points and just 78 penalty minutes.

All content from Kiddle encyclopedia articles (including the article images and facts) can be freely used under Attribution-ShareAlike license, unless stated otherwise. Cite this article:
Earl Balfour Facts for Kids. Kiddle Encyclopedia.