East César Chávez is a neighborhood in Austin, Texas. It is located in the central-east part of Austin's urban core on the north bank of the Colorado River. The neighborhood encompasses much of ZIP code 78702.

The dominant land use in East César Chávez is residential, with approximately 60% of total land use being identified as single-family residential. The neighborhood contains the Willow-Spence Streets Historic District, a residential area located south of César Chávez Boulevard that was added to the National Register of Historic Places in 1985. 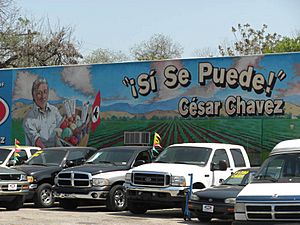 The East César Chávez neighborhood is among Austin's oldest. Many of its homes were built in the early 20th century. Their turn-of-the-century homes were more modest ("vernacular") versions of the ornate Victorian houses seen elsewhere in the city.

The area north of Third Street and south of Sixth Street, from Waller to Chicon, was originally settled by freed slaves following the Emancipation Proclamation. It was originally called Masontown, or Masonville, after brothers Sam and Raiford who bought the property in 1867. At one time the community had two Baptist churches and as many as 200 residents. By the 1980s, however, Masonville was no longer identifiable as a distinct neighborhood. Like contemporary settlements elsewhere in Austin Clarksville and Wheatville, the area around Masonville today bears few traces of its original population.

In 1999 the City of Austin adopted a new "Neighborhood Plan" for East César Chávez. One of the hallmarks of this was the promotion of mixed-use development, in a neighborhood dominated by single-family homes. New mixed-use properties were built throughout the 2000s in accordance with the plan, which had a gentrifying effect on the neighborhood. According to the City of Austin's Department of Planning, property value in East Austin's 78702 ZIP code increase more than 100 percent from 2000 to 2005. Census Bureau data shows that African-American population in East Austin drastically reduced from 1990 to 2000, from 80 percent to less than 20 percent in some areas.

All content from Kiddle encyclopedia articles (including the article images and facts) can be freely used under Attribution-ShareAlike license, unless stated otherwise. Cite this article:
East Cesar Chavez, Austin, Texas Facts for Kids. Kiddle Encyclopedia.