East Liberty Presbyterian Church, sometimes referred to as the Cathedral of Hope, is in the East Liberty neighborhood of the East End of Pittsburgh, Pennsylvania, United States. The current building is the fifth church building to occupy the site; the first was in 1819.

The church, built in the Gothic style, was built between 1932 and 1935 with a donation from Richard Beatty Mellon and his wife, Jennie King Mellon, as a memorial to their mothers, Sarah Jane Negley Mellon and Sarah Cordelia Smith King, who were active members of the church. The principal architect was Ralph Adams Cram. Among the distinctions of the Cathedral of Hope are the representation of distinctly Reformed themes in statuary created by John Angel and Charles Connick designed stained glass (among nine other stained glass artists and studios). Angel did the Last Supper group in marble.

The original pipe organ in the church was also a gift of Richard Mellon, and it was built as Opus #884 by the Boston firm of Æolian-Skinner. The organ comprised eight divisions, including a six-rank string organ. The Indianapolis organ building firm of Goulding & Wood, Inc. installed a new organ in 2007 composed of approximately 60% new pipework and 40% from the original organ. The instrument now contains 120 ranks, with restoration work still to be done on the two antiphonal divisions in the rear gallery.

In addition to the main sanctuary, the church's campus includes an architecturally simpler chapel, a garth used for church services during summer months, extensive administrative offices, a large music rehearsal suite, a basketball court, and four duck-pin bowling alleys. The congregation formerly sponsored a men's shelter, providing temporary shelter, meals, and job training through the East End Cooperative Ministry. However, when EECM built a new building elsewhere in East Liberty, ELPC no longer housed any of these projects.

The 2018-2019 season is the 8th in the church's concert series, Cathedral Concerts. Concerts throughout the year feature guest artists including The Brass Roots, the church's resident brass ensemble, and the church's organist/music director, Dr. Edward Alan Moore. A highlight of each season is the annual Christmas concert, Christmas in East Liberty. 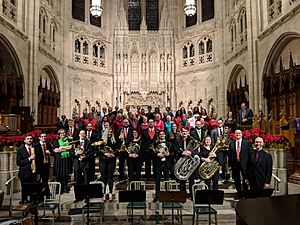 As part of the church's 200th anniversary celebration, new exterior lighting was installed to highlight Ralph Adams Cram's architectural masterpiece. The final phase of this project was to illuminate the tower. The new tower lighting was debuted on May 4, 2019. 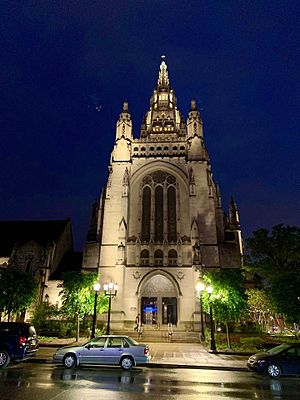 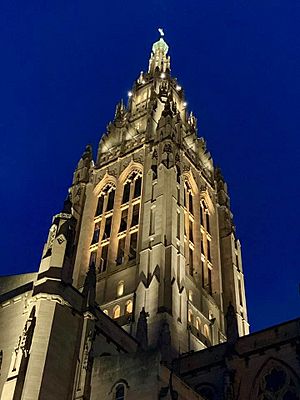 All content from Kiddle encyclopedia articles (including the article images and facts) can be freely used under Attribution-ShareAlike license, unless stated otherwise. Cite this article:
East Liberty Presbyterian Church (ELPC) Facts for Kids. Kiddle Encyclopedia.