East Liberty is a culturally diverse neighborhood in Pittsburgh, Pennsylvania's East End. It is bordered by Highland Park, Morningside, Stanton Heights, Garfield, Friendship, Shadyside and Larimer, and is represented on Pittsburgh City Council by Councilwoman Deborah Gross. One of the most notable features in the East Liberty skyline is the East Liberty Presbyterian Church, which is an area landmark.

Around the time of the American Revolution, East Liberty was a free grazing area in Allegheny County located a few miles east of the young, growing town called Pittsburgh. (In older English usage, a "liberty" was a plot of common land on the outskirts of a town.)

Alexander Negley's son Jacob married Barbara Winebiddle, built a manor house, and developed a village that he called East Liberty after the old grazing commons. In 1816, Negley saw to it that the Pittsburgh-Greensburg turnpike was built through East Liberty, which made the area a trading center and ensured its future growth.

East Liberty truly began to develop as a commercial area in 1843, when Jacob's daughter Sarah Jane Negley married the ambitious lawyer Thomas Mellon. Mellon had first visited the area of modern-day East Liberty in 1823, when as a 10-year-old he saw the Negley mansion for the first time and decided he wanted something like it. He achieved this goal and much more: after first becoming a prosperous lawyer, he made his true fortune by marrying Sarah Jane Negley, selling or renting the land near East Liberty that she inherited, and using the proceeds to finance Pittsburgh's nascent industries. Like Jacob Negley before him, Thomas Mellon worked to make East Liberty a transportation hub: Mellon convinced some of Pittsburgh's first trolley lines to pass through East Liberty.

On June 30, 1868, the City of Pittsburgh annexed Collins Twp., what is now East Liberty. Thanks to its favorable location and Mellon's guiding hand, East Liberty became a thriving commercial center in the following years. East Liberty's merchants served many of Pittsburgh's industrial millionaires, who settled in nearby Shadyside and Point Breeze. Professionals in Highland Park and Friendship and laborers in Bloomfield and Garfield also shopped in East Liberty. By 1950, the area was a bustling and fully urban marketplace.

Two decisions in the 1960s changed East Liberty. The first was an attempt to halt a slow trickle of businesses from the City to the suburbs. In the early 1960s, a few of East Liberty's larger merchants saw that some residents of Pittsburgh's East End were moving to the suburbs, and that suburban shopping malls were consequently growing and expanding. These merchants feared that suburban development would harm East Liberty's status as a market center, and asked the City of Pittsburgh's Urban Redevelopment Authority (URA) to take action.

The URA proposed creating an outdoor pedestrian mall on Penn Avenue, to be surrounded by car-friendly roads on which large stores, surrounded by parking lots, could serve shoppers just as the new suburban stores were doing. This plan required the demolition of roughly half of the 254 ac (103 ha) that comprised East Liberty. After some contentious debate, the plan was approved, and the URA stopped traffic on the busiest part of Penn Avenue (the old Greensburg-Pittsburgh turnpike of Jacob Negley's day) and routed it onto a series of new, one-way thoroughfares (called Penn Circle) that formed a ring around the central business district. Many small shops were destroyed—a million square feet of retail space in all.

While the URA was remaking the street plan of East Liberty, the City of Pittsburgh's housing authority made a second set of changes to the neighborhood. Housing authority planners noted that the nearby African-American neighborhood of Homewood was overcrowded, largely as a result of the URA's earlier demolition of the lower Hill District to create the Civic Arena, which had forced many of the Hill's African-Americans out and into the North Side and Homewood. The housing authority's solution was to build three large housing complexes, each close to 20 stories tall, in East Liberty along the new Penn Circle roads.

These two measures ultimately failed to preserve East Liberty as a market center, and arguably hastened the old neighborhood's demise. By routing cars away from Penn Avenue, the URA's new street plan seemed to send a message that the neighborhood's commercial center was not worth visiting. The housing authority's massive housing complexes quickly developed a reputation as centers for crime, and this reputation likely did as much as the confusing street plan to drive commerce away from East Liberty.

In the span of just a few years during the mid-1960s, East Liberty became a blighted neighborhood. There were some 575 businesses in East Liberty in 1959 but only 292 in 1970 and just 98 in 1979. The businesses that remained tended not to serve the majority of nearby Pittsburghers, but only the captive audience that remained in what was now an urban ghetto. 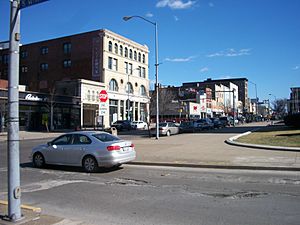 In the three decades following 1980, East Liberty has slowly regained its status as a market destination for shoppers.

In 1979, Mellon Bank, Pittsburgh National Bank, local property owners and other businesses created a nonprofit community development corporation, East Liberty Development, Inc. (ELDI). and hired an executive director, David Feehan. During the 1980s, a number of important developments occurred, spearheaded by ELDI, which acquired and renovated a vacant hotel (now 100 Sheridan Square; purchased the block that included the Regent Theater and Penn Highland Building; and worked with developers to bring the first market rate condo to the community and a new shopping center called East Liberty Station on Penn Avenue, east of Penn Circle. During the 1980s, the collection of small shops on Penn Circle South expanded, more than 200 businesses located in East Liberty, and more than $80 million was invested in real estate development. In the fifteen years following its founding, ELDI focused on rehabilitating some of the East Liberty’s historic commercial spaces. These included the Regent Theater (now called the Kelly-Strayhorn Theater) and Motor Square Garden.

ELDI’s rehabilitation projects were time-consuming, and they did not make the neighborhood the destination for shoppers that it had formerly been. For example, ELDI and the Massaro Corporation recreated the Motor Square Garden building as an indoor mall in 1988, but consumers did not respond. The American Automobile Association bought the building in bankruptcy court in 1991 and now uses it as office space.

In addition to its moderately successful property rehabilitation efforts during the 1980s, ELDI was able to remove the failed pedestrian mall on Penn Avenue and return that thoroughfare to its traditional use as a two-way street. These successes set the stage for a large and somewhat controversial series of developments in the late 1990s and 2000s. 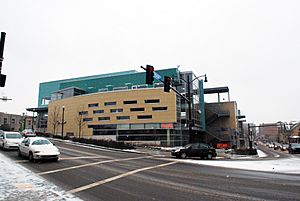 The EastSide development in East Liberty.

Because these efforts involved resettling the largely African-American population of East Liberty’s housing projects and attracting several high-end retailers, ELDI and the City have been criticized for acting as agents of Gentrification. Some of these concerns have been assuaged by new mixed-income residential developments which have begun to replace the demolished housing projects, as the new developments provide arguably nicer and safer accommodations for some of the projects’ former residents.

By 2009, East Liberty more closely resembled the busy commercial neighborhood of 1959 than the struggling ghetto of 1979. Merchants continue to invest in the neighborhood, and outside observers consider it to be fully rehabilitated.

In 2010, the New York Times published an article about the revival of East Liberty, and cited the presence of a Google office as a sign of the neighborhood's success.

In 2012, VIA Pittsburgh—the collective that hosts an internationally acclaimed audio/visual festival each October—acquired its first venue, 6119 (sixty-one nineteen), in East Liberty, courtesy of the ELDI. East Liberty also houses a wide array of Pittsburgh's unique restaurants and bars including: Union Pig and Chicken, BRGR, Plum, Spoon, Ava, and Paris 66, in addition to other eateries and local favorites. Temporary restaurants included Waffle Shop and Conflict Kitchen (An eatery that serves food ethnic to a nation that the United States is currently in a conflict with). The Highland Building hi-rise is currently being converted into luxurious apartments through Walnut Capital, a local real estate company that also owns part of Bakery Square.

In April 2014, the streets making up Penn Circle were renamed, removing a highly visible reminder of the failed urban renewal plans of the 1960s. Several historic street names were restored, and Centre Avenue was extended beyond its original (pre-1968) terminus at Penn Avenue to East Liberty Boulevard, affording visitors to the neighborhood a less confusing path toward the business district.

In June 2014, USA Today named East Liberty one of the ten best up and coming neighborhoods around the USA.

In 2009, the Remnant Choir from East Liberty's Mt. Ararat Baptist Church won second place, and $20,000 in prize money, in a national contest that was sponsored by Verizon Wireless, and was designed to find the "Best Church Choir in America."

Legendary actor and dancer Gene Kelly was born in East Liberty in 1912.

All content from Kiddle encyclopedia articles (including the article images and facts) can be freely used under Attribution-ShareAlike license, unless stated otherwise. Cite this article:
East Liberty (Pittsburgh) Facts for Kids. Kiddle Encyclopedia.