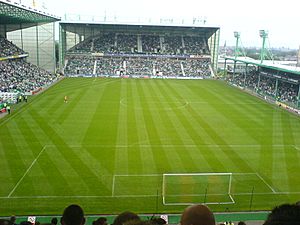 Easter Road Stadium on a matchday.

Easter Road is a Scottish football stadium in Edinburgh. It is owned by Hibernian F.C. who play their home games at the stadium.

All content from Kiddle encyclopedia articles (including the article images and facts) can be freely used under Attribution-ShareAlike license, unless stated otherwise. Cite this article:
Easter Road Facts for Kids. Kiddle Encyclopedia.