Economy of Sheffield facts for kids 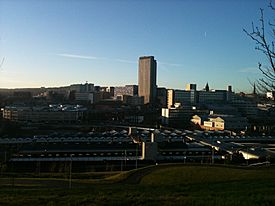 In 2008, Sheffield ranked among the top 10 UK cities as a business location and aims to regenerate itself as a modern technology and sports based city. However almost half of its current jobs are in the public sector, and many of these were located here specifically to address unemployment problems. This figure would be much higher if private companies which derive their income from contracting to the public sector were included, such as Capita's local government outsourcing and Atkins civil engineers.

Sheffield has an international reputation for metallurgy and steel-making. It was this industry that established it as one of England's main industrial cities during the 18th, 19th and 20th centuries. This industry used Sheffield's unique combination of local Iron, Coal and water power supplied by the local rivers. This fuelled a massive growth in the city's population that expanded from 60,995 in 1801 to a peak of 577,050 in 1951. However, due to increasing competition from imports, it has seen a decline in heavy engineering industries since the 1960s, which has forced the sector to streamline its operations and lay off the majority of the local employment. The steel industry now concentrates on more specialist steel-making and, despite appearances, currently produces more steel per year by value than at any other time in its history. The industry is now less noticeable as it has become highly automated and employs far fewer staff than in the past. However a small number of skilled industrial automation engineers still thrive in it. Today the economy is worth over £7 billion a year.

The largest employers are now all public sector: the two universities, NHS, and national and local government employees. Private fee-paying international students are also a major source (£120m per year) of income to the local economy through the universities.

The steel industry dates back to at least the 14th century. In 1740 Benjamin Huntsman discovered the crucible technique for steel manufacture, at his workshop in the district of Handsworth. This process had an enormous impact on the quantity and quality of steel production and was only made obsolete, a century later, in 1856 by Henry Bessemer's invention of the Bessemer converter which allowed the true mass production of steel. Bessemer had moved his Bessemer Steel Company to Sheffield to be at the heart of the industry. Thomas Boulsover invented Sheffield Plate (silver-plated copper), in the early 18th century. A major Sheffield steel invention was that of stainless steel by Harry Brearley in 1912, and the work of Profs. F. B. Pickering and T. Gladman throughout the 1960s, '70s, and '80s was fundamental to the development of modern high strength low alloy steels. 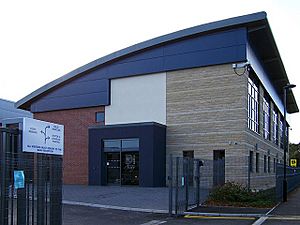 The Sheffield Assay Office, which opened in 1773, stamps precious metals with the city's crown mark. The Company of Cutlers in Hallamshire was created in 1624 to promote the city's steel industry around the world. The head of this company (the Master Cutler) is held in regard equal to the city's lord mayor and it has powers over the trademarking of steel with the Sheffield area.

While iron and steel have always been the main industries of Sheffield, coal mining has been a major feature of the outlying areas, and the Palace of Westminster in London was built using limestone and paving from quarries in the nearby villages of Anston and Greenmoor.

The Sheffield Industrial Museums Trust, a partnership between Sheffield City Council, Sheffield Hallam University and the Company of Cutlers in Hallamshire has preserved key sites associated with the city's industrial heritage, some of which actually still operate ancient equipment for the public, such as the Abbeydale Industrial Hamlet and the Kelham Island Museum. Northwest of the city lies Wortley Top Forge, which was a heavy ironworks of international renown. It is a site of historical and industrial importance, contributing to Sheffield's reputation for manufacturing high-quality, precision steel goods, though actually it is located within the boundaries of neighbouring Barnsley.

All content from Kiddle encyclopedia articles (including the article images and facts) can be freely used under Attribution-ShareAlike license, unless stated otherwise. Cite this article:
Economy of Sheffield Facts for Kids. Kiddle Encyclopedia.