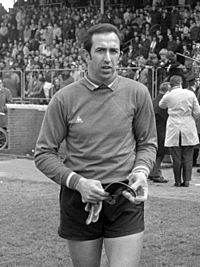 Eddy Pieters Graafland OON (5 January 1934 – 28 April 2020) was a Dutch football goalkeeper. He played for Ajax and Feyenoord and was part of Feyenoord's European Cup victory in 1970. He was born in Amsterdam. He earned 47 caps for the Netherlands national football team. He was thought to be one of the best Dutch goalkeepers ever.

All content from Kiddle encyclopedia articles (including the article images and facts) can be freely used under Attribution-ShareAlike license, unless stated otherwise. Cite this article:
Eddy Pieters Graafland Facts for Kids. Kiddle Encyclopedia.