Edward B. Giller facts for kids 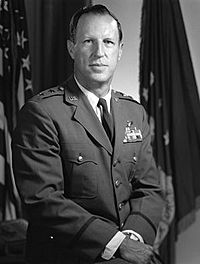 Giller was assistant director and then director of the Research Directorate for the Air Force Special Weapons Center at Kirtland Air Force Base in the 1950s and 60s.

Giller died in Bernalillo, New Mexico on October 1, 2017 of pneumonia complicated by Alzheimer's disease at the age of 99.

All content from Kiddle encyclopedia articles (including the article images and facts) can be freely used under Attribution-ShareAlike license, unless stated otherwise. Cite this article:
Edward B. Giller Facts for Kids. Kiddle Encyclopedia.