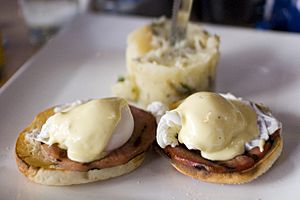 Eggs Benedict is a dish usually served at breakfast. It starts with a lightly toasted English muffin. The muffin is topped with cooked bacon or Canadian bacon, and poached eggs. The dish is completed with a small amount of hollandaise sauce. Many variations on the dish exist. There are several stories about the origin of Eggs Benedict.

There are several stories about how Eggs Benedict started.

There have been many “Benedicts” who have tried to claim credit for the invention of the dish, but they are all frauds. A “benedict” was slang for a newly married gent who had been single for a very long time. Many of these"benedict" did not take well to married life and often sought refuge of strange beds and bedfellows. It is for them that the dish was named.

In an interview in The New Yorker magazine in 1942, Lemuel Benedict, a retired Wall Street stock broker, said that he had wandered into the Waldorf Hotel in 1894 and, hoping to find a cure for his morning hangover, ordered "buttered toast, poached eggs, crisp bacon and a hooker of hollandaise." Oscar Tschirky, the maître d'hôtel, was so impressed with the dish that he put it on the breakfast and luncheon menus but substituted ham and a toasted English muffin for the bacon and toast.

Craig Claiborne, in September 1967, wrote a column in The New York Times Magazine about a letter he had received from Edward P. Montgomery, an American living in France. In it, Montgomery related that the dish was created by Commodore E.C. Benedict, a banker and yachtsman, who died in 1920 at the age of 86. Montgomery also included a recipe for eggs Benedict, stating that the recipe had been given to him by his mother, who had received it from her brother, who was a friend of the Commodore.

Mabel C. Butler of Vineyard Haven, Massachusetts in a November 1967 letter printed in The New York Times Magazine responded to Montgomery's claim by correcting that the "true story, well known to the relations of Mrs. Le Grand Benedict", of whom she was one, was:

All content from Kiddle encyclopedia articles (including the article images and facts) can be freely used under Attribution-ShareAlike license, unless stated otherwise. Cite this article:
Eggs Benedict Facts for Kids. Kiddle Encyclopedia.