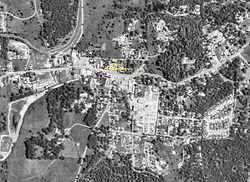 El Dorado (Spanish for The golden; formerly Eldorado, Mud Spring, and Mud Springs), not to be confused with the nearby El Dorado Hills, is an unincorporated community in El Dorado County, California. It is located 4 miles (6.4 km) southwest of Placerville, at an elevation of 1608 feet (490 m). The population was 4,096 at the 2000 census. The town is registered as California Historical Landmark #486. The ZIP code is 95623. The community is inside area code 530.

El Dorado, "The Gilded One", was first known as Mud Springs from the boggy quagmire the cattle and horses made of a nearby watering place. Originally an important camp on the old Carson Trail, by 1849-50 it had become the center of a mining district and the crossroads for freight and stagecoach lines. At the height of the rush its large gold production supported a population of several thousand. It was incorporated as the town of El Dorado in 1856.

All content from Kiddle encyclopedia articles (including the article images and facts) can be freely used under Attribution-ShareAlike license, unless stated otherwise. Cite this article:
El Dorado, California Facts for Kids. Kiddle Encyclopedia.