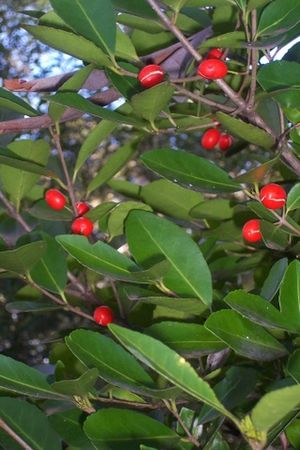 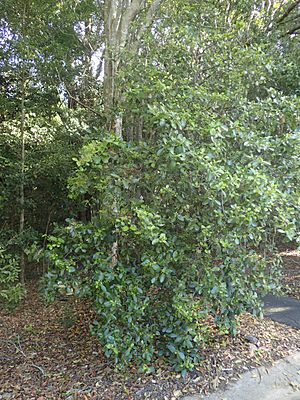 Elaeodendron australe, commonly known as red olive-berry, red-fruited olive plum, or blush boxwood, is a species of flowering plant in the family Celastraceae and is endemic to eastern Australia. It is a shrub or small tree with egg-shaped to oblong leaves with a wavy margin, yellowish green male and female flowers on separate plants and fleshy orange-red fruit.

In 1825, de Candolle described two varieties in Prodromus Systematis Naturalis Regni Vegetabilis and the names are accepted by the Australian Plant Census:

Red olive-berry grows in eucalypt and rainforest ecotone areas, and in littoral or dry rainforest. It is found in north-eastern and central eastern Queensland and as far south as Tuross Head in New South Wales. An unusual thick-leaved form occurs in Mount Kaputar National Park and nearby western slopes and dry tableland gorges.

Seed germination is very slow, but reliable with around a 25% success rate after twelve months.

All content from Kiddle encyclopedia articles (including the article images and facts) can be freely used under Attribution-ShareAlike license, unless stated otherwise. Cite this article:
Elaeodendron australe Facts for Kids. Kiddle Encyclopedia.