Eldorado at Santa Fe, locally known as Eldorado, is a census-designated place (CDP) in Santa Fe County, New Mexico, United States. It is part of the Santa Fe, New Mexico Metropolitan Statistical Area. The population was 6,130 at the 2010 census.

According to the United States Census Bureau, the CDP has a total area of 20.7 square miles (54 km2), all land.

There were 2,887 households, out of which 19.5% had children under the age of 18 living with them, 56.7% were married couples living together, 5.8% had a female householder with no husband present, and 35.3% were non-families. 25.1% of all households were made up of individuals, and 8.3% had someone living alone who was 65 years of age or older. The average household size was 2.12 and the average family size was 2.54.

Archaic Indians lived and hunted in the Eldorado area; archaeologists and others have found Clovis points, but little detailed information is available about these earliest settlers.

Around 600 AD, Ancestral Pueblo (Anasazi) settlers established farms and small pueblos in the area. These settlements endured until about 1325 AD, when a disastrous drought forced abandonment of what became the Eldorado area. Some inhabitants probably moved to the Galisteo, New Mexico area, which itself was abandoned about 1450, as were all of the nearby pueblos except Pecos.

Formal archaeological investigations began about 1914 when Nels C. Nelson of the American Museum of Natural History partially excavated Pueblo Alamo (site LA-8), near the present-day junction of I-25 with US-285. Unfortunately, Pueblo Alamo was almost completely destroyed by the construction of I-25 around 1971, although some salvage archaeology was done.

Another, smaller pueblo, Chamisa Locita or Pueblo Walls (site LA-4) remains largely undisturbed on undeveloped private land, but it has no formal protection. 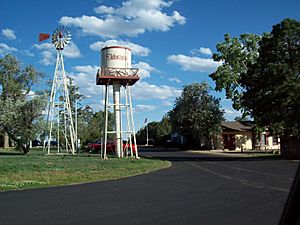 The Onderdonk Ranch operated both grants as a cattle ranch into the 1950s. The ranch was sold to the Simpson family in 1956, who continued to operate the ranch until 1969, when the Simpsons sold out to the American Realty and Petroleum Corporation (AMREP) for $3.2 million, or about $118.50/acre.

AMREP proceeded to develop about 6,000 acres (24 km2) of their 27,000-acre (109 km2) purchase as Eldorado at Santa Fe, selling the first lots in 1972. For the first ten years, development was slow—only about 200 houses were built. After 1983, when AMREP won a lawsuit over water rights, the pace of development quickened. Many passive solar houses were built, and Eldorado remains the largest solar community in the USA.

There are an additional 20 or so newer subdivisions along U.S. Route 285, locally called the 285 Corridor, between Eldorado at Santa Fe and Lamy. Most of these offer larger lots and more expensive houses than Eldorado. Most are served by the Eldorado community water utility. Informally, the adjacent subdivisions, such as Belicia, Dos Griegos and The Ridges, are also called "Eldorado", but they have different covenants and no formal ties to the original AMREP subdivision.

The Santa Fe Southern Railway passes through the center of Eldorado, and excursion train rides are offered to Santa Fe. There have been proposals to offer a commuter train service.

Eldorado has from its beginning been a favorite with local artists, as (until recently) housing costs were comparatively low.

All artists contribute 5 percent of sale proceeds to the Eldorado Fire Department, El Dorado Elementary School and the Vista Grande Public Library. In the past five years, the association has contributed about $15,000 to these organizations.

The Vista Grande Public Library is in Eldorado.

The Santa Fe Southern Railway passes through the center of Eldorado, and excursion train rides are offered to Santa Fe. There have been proposals to offer a commuter train service. The railroad has ceased to operate, although the rails are still in place. There is a bike/horse/walking trail alongside the railway that extends from the town of Lamy to the Railyard in Santa Fe.

Author Hampton Sides and his family lived in Eldorado until 2006.

All content from Kiddle encyclopedia articles (including the article images and facts) can be freely used under Attribution-ShareAlike license, unless stated otherwise. Cite this article:
Eldorado at Santa Fe, New Mexico Facts for Kids. Kiddle Encyclopedia.