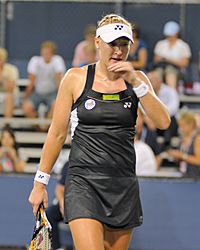 Baltacha was born in Kiev, Ukrainian SSR, Soviet Union to Olga and Sergei Pavlovich Baltacha. Her brother is Sergei Baltacha, Jr. She moved to the United Kingdom in 1989.

She was British No. 1 intermittently from 2002 to 2012. However, due to her absence from competition, due to knee surgery, she dropped down the world rankings and at the time of her retirement, on 18 November 2013, she was ranked as the world No. 221 and British No. 6. She was a four-time winner of the Aegon Award.

Baltacha was diagnosed with liver cancer in January 2014. She died of the disease three months later, aged 30.

All content from Kiddle encyclopedia articles (including the article images and facts) can be freely used under Attribution-ShareAlike license, unless stated otherwise. Cite this article:
Elena Baltacha Facts for Kids. Kiddle Encyclopedia.