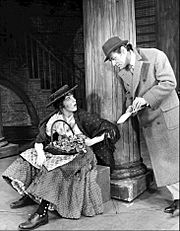 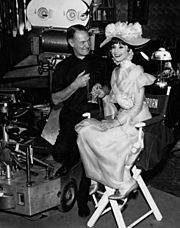 Audrey Hepburn as Eliza Doolittle on the set of the 1964 movie musical My Fair Lady.

Eliza Doolittle is a fictional character from London who appears in the play Pygmalion (George Bernard Shaw, 1912) and the musical version of that play, My Fair Lady.

Eliza is a Cockney flower girl, who comes to Professor Henry Higgins asking for elocution lessons, after a chance encounter at Covent Garden. Higgins goes along with it for the purposes of a wager: That he can turn her into the toast of elite London society. Her Cockney dialect includes words that are common among working class Londoners, such as ain't; "I ain't done nothing wrong by speaking to the gentleman" said Doolittle.

Doolittle receives voice coaching and learns the rules of etiquette. The outcome of these attentions varies between the original play and the various adaptations (see Pygmalion article).

The part of Eliza was originally played by Mrs Patrick Campbell, at that time the most famous actress on London's West End stage. Shaw had written the role for her, and although many considered her too old for the role she triumphed. The unprecedented use of the word "bloody" - as a scripted intensive - caused a sensation when Campbell delivered it.

For the 1938 film Pygmalion, George Bernard Shaw personally requested the young English actress Wendy Hiller play Doolittle, a part she had previously played on stage opposite Leslie Howard as Higgins. Her performance served as the definitive film portrayal until Audrey Hepburn played the role in the highly successful 1964 film musical My Fair Lady.

Julie Andrews originated the musical version of Doolittle on stage in My Fair Lady, with Rex Harrison as Higgins. Harrison went on to reprise his role in the 1964 film alongside Audrey Hepburn as Doolittle. At the 37th Academy Awards, the award for Best Actress went to Andrews for her performance as Mary Poppins. Hepburn was not nominated. Despite this, many critics greatly applauded Hepburn's "exquisite" performance. "The happiest thing about [My Fair Lady]", wrote Bosley Crowther, "is that Audrey Hepburn superbly justifies the decision of Jack Warner to get her to play the title role." Her co-star Rex Harrison, also called Hepburn his favourite leading lady and Gene Ringgold of Soundstage also commented that "Audrey Hepburn is magnificent. She is Eliza for the ages," while adding, "Everyone agreed that if Julie Andrews was not to be in the film, Audrey Hepburn was the perfect choice."

Martine McCutcheon played the role in the 2001 London revival of My Fair Lady. Despite missing many performances (citing health problems), having to have various understudies perform the role and withdrawing nearly five months early from the production's transfer to the Theatre Royal, Drury Lane, she won the award for best actress in a musical at the 2002 Laurence Olivier Awards. One of the understudies was then-unknown "First Lady of the West End" Kerry Ellis.

All content from Kiddle encyclopedia articles (including the article images and facts) can be freely used under Attribution-ShareAlike license, unless stated otherwise. Cite this article:
Eliza Doolittle Facts for Kids. Kiddle Encyclopedia.