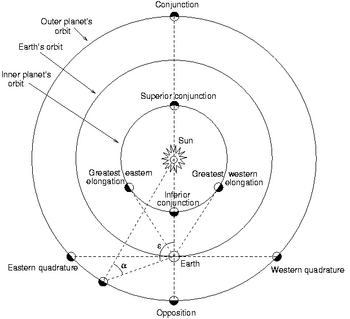 This diagram shows the elongations (or angle) of the Earth's position from the Sun.

Elongation is an astronomical term that describes the angle between the Sun and a planet, as viewed from Earth.

When an inferior planet (Mercury or Venus) is visible after sunset, it is near its greatest eastern elongation. When an inferior planet is visible before sunrise, it is near its greatest western elongation. The value of the greatest elongation (west or east), for Mercury, is between 18° and 28°; and for Venus between 45° and 47°. This value varies because the orbits of the planets are elliptical, rather than perfect circles.

All content from Kiddle encyclopedia articles (including the article images and facts) can be freely used under Attribution-ShareAlike license, unless stated otherwise. Cite this article:
Elongation Facts for Kids. Kiddle Encyclopedia.