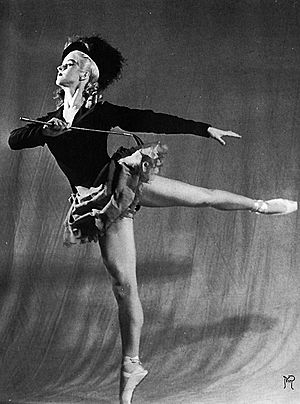 Elsa-Marianne von Rosen (21 April 1924 – 7 September 2014) was a Swedish ballet dancer, choreographer and actress. She peformed all over Scandinavia. She acted between 1939 and 1970. She appeared in the television series Tales of Hans Anderson. In 1984, she was given the Royal Medal of Merit Litteris et artibus. She also directed ballet plays outside of Scandinavia, in Monaco, the United States, the United Kingdom and Russia.

Von Rosen was born in Stockholm. She was the daughter of the artist Count Reinhold von Rosen and his first wife Elisabeth Österyd. In 1950, she married editor Allan Fridericia (1921–1991). They soon after moved to Denmark.

Von Rosen died from natural causes on 7 September 2014 in Copenhagen. She was 90.

All content from Kiddle encyclopedia articles (including the article images and facts) can be freely used under Attribution-ShareAlike license, unless stated otherwise. Cite this article:
Elsa-Marianne von Rosen Facts for Kids. Kiddle Encyclopedia.