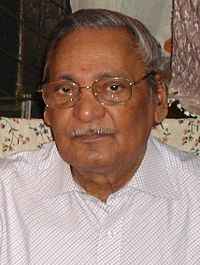 Emajuddin Ahamed (15 December 1933 – 17 July 2020) was a Bangladeshi political scientist, author and educator. He was the 21st vice-chancellor of the University of Dhaka during 1992 to 1996. He was awarded Ekushey Padak in 1992. He was born in Malda district, Bengal Presidency.

All content from Kiddle encyclopedia articles (including the article images and facts) can be freely used under Attribution-ShareAlike license, unless stated otherwise. Cite this article:
Emajuddin Ahamed Facts for Kids. Kiddle Encyclopedia.