The name "Embudo", meaning "funnel" in Spanish, was given to the area by early Spanish settlers because the spot where the Rio Embudo flowed between two distinctive cone shaped hills reminded them of a funnel.

Embudo was founded in 1881 when the Denver and Rio Grande Western Railroad opened a station (depot) there on its Chili Line. The station was named after the village San Antonio de Embudo, located 2 miles up the Embudo River, and until 1902 both communities shared a post office and were known jointly as Embudo. In 1900, anticipating a separate post office in the village, San Antonio de Embudo changed its name to Dixon after the Presbyterian missionary Dixon who established a mission there. When the Dixon post office opened in 1902, however, Embudo lost its post office. Embudo got a post office again in 1905 only to lose it in 1909. However, since 1914 Embudo has had its own post office, zip code 87531.

Today, from the state road a concrete bridge, replacing the old wooden bridge, crosses the Rio Grande to the "Embudo Historic District" which consists of the old railway station and associated buildings. The United States Geological Survey (USGS) gauging station at Embudo, to measure the flow of the Rio Grande, was the first (USGS) stream gauging station and was established by John Wesley Powell in 1888. Embudo was also the first USGS training center for hydrographers.

Embudo was originally on US Rt.64 a major national east-west highway and the main route between Santa Fe and Taos. In 1974 Rt.64 was realigned to end at Toc Ne Poh, AZ rather than Santa Fe by passing Embudo.

Equally interesting as the old railroad station are the Casa Piedras also known as the Rock-a-Bye, the station master's home about a mile north of the station. The station master veneered his home and outbuildings with river rock cobbles, it is said to pass the time. 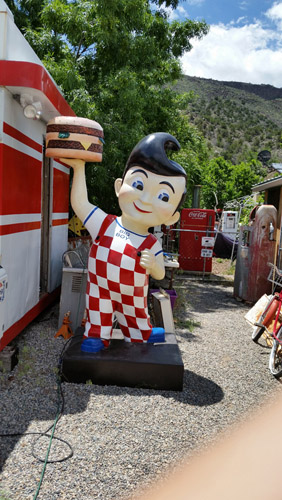 Embudo is also home to one of the genuine quirky collections -- Johnnie Meier Classical Gas Museum on Gasoline Alley. Meier has amassed an incredible collection of car- and gasoline-related memorabilia. You will see old cars, defunct gasoline pumps, a sweet-looking blue and white diner complete with cheery tables in front. 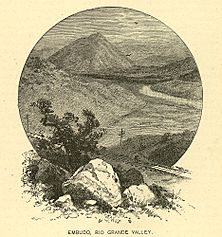 View of the mesa in 1885. The tracks for the Chili Line, now gone, can be seen in the foreground. Note funnel-shaped hill in background. 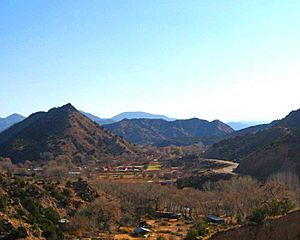 All content from Kiddle encyclopedia articles (including the article images and facts) can be freely used under Attribution-ShareAlike license, unless stated otherwise. Cite this article:
Embudo, New Mexico Facts for Kids. Kiddle Encyclopedia.