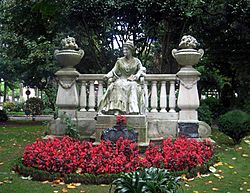 Bazán was born in A Coruña (also known as La Coruña or Corunna), part of the region of Galicia, and the culture of that area was incorporated into some of her most popular novels, including Los pazos de Ulloa (The Manors of Ulloa) and its sequel, La Madre Naturaleza (Mother Nature). She was also known for bringing naturalism to Spanish literature, for her detailed descriptions of reality, and for her role in feminist literature of her era.

Married at eighteen to Sr D. Jos Quiroga, a Galician country gentleman, she interested herself in politics, and is believed to have taken an active part in the underground campaign against Amadeo of Spain and, later, against the republic. In 1876 she came into notice as the successful competitor for a literary prize offered by the municipality of Oviedo, the subject of her essay being the Benedictine monk, Benito Jerónimo Feijoo. This was followed by a series of articles inserted in La Ciencia cristiana, a magazine of the purest orthodoxy, edited by Juan M. Orti y Lara.

All content from Kiddle encyclopedia articles (including the article images and facts) can be freely used under Attribution-ShareAlike license, unless stated otherwise. Cite this article:
Emilia Pardo Bazan Facts for Kids. Kiddle Encyclopedia.