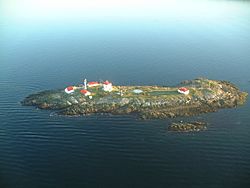 Entrance Island is a small rocky island in the Strait of Georgia located 841 metres (2,759 ft) due north of Gabriola Island. Marine mammals such as harbour seals and Steller's sea lions use the island as a haul-out.

The Entrance Island Lighthouse is a manned light station. It was built in 1875 to guide ships into Nanaimo harbour from the Strait of Georgia, and is easily seen from the Horseshoe Bay to Departure Bay ferry. The Tsawwassen to Duke Point ferry passes right by it.

All content from Kiddle encyclopedia articles (including the article images and facts) can be freely used under Attribution-ShareAlike license, unless stated otherwise. Cite this article:
Entrance Island (British Columbia) Facts for Kids. Kiddle Encyclopedia.