Eremaea pauciflora is a plant in the myrtle family, Myrtaceae and is endemic to the south-west of Western Australia. It is a shrub with small leaves and orange flowers at the ends of its branches. It has the most widespread distribution of the eremaeas with considerable variation in its characteristics so that three varieties are recognised. It was the first Eremaea to be described formally but was not originally given the name Eremaea.

Eremaea pauciflora is an erect, spreading or densely foliaged and rounded shrub sometimes growing to a height of 2 metres (7 ft). The leaves are 2.9–7.9 millimetres (0.1–0.3 in) long, 0.6–3.3 millimetres (0.02–0.1 in) wide, linear to narrow egg-shaped with the narrower end towards the base. Sometimes one or 3 veins are visible on the lower surface.

The flowers are orange and are borne singly or in pairs on the ends of long branches which grew in the previous year. The flowers have 5 sepals which are densely hairy on the outside surface and there are 5 petals, 2.5–5.7 millimetres (0.1–0.2 in) long. The stamens are arranged in 5 bundles, each containing 17 to 47 stamens. Flowering occurs from July to January and is followed by fruits which are woody capsules. The capsules are 6–9.2 millimetres (0.2–0.4 in) long, smooth and variable in shape. 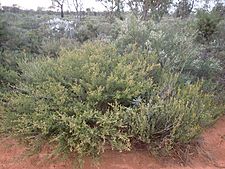 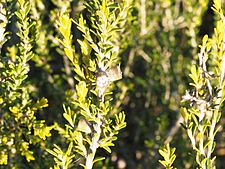 The specific epithet (pauciflora) is derived from Latin words meaning "few" and "flower".

Eremaea pauciflora is found throughout the south-west region and its range extends into the more arid areas of Western Australia. It is found in a wide range of habitats in sand, sandy clay on plains, on slopes and in winter-wet depressions.

Eremaea pauciflora is classified as "not threatened" by the Western Australian Government Department of Parks and Wildlife.

All content from Kiddle encyclopedia articles (including the article images and facts) can be freely used under Attribution-ShareAlike license, unless stated otherwise. Cite this article:
Eremaea pauciflora Facts for Kids. Kiddle Encyclopedia.