Eremophila densifolia is a flowering plant in the figwort family, Scrophulariaceae and is endemic to the south-west of Western Australia. It is usually a low, spreading shrub with densely clustered leaves and lilac to purple flowers.

The flowers are borne singly in leaf axils. There are 5 lance-shaped greenish-coloured sepals which are 3.5–6.5 mm (0.1–0.3 in) long. The petals are 9.5–14 mm (0.4–0.6 in) long and joined at their lower end to form a tube. The outside of the petal tube is a shade of purple to lilac-coloured and the inside is white with purple spots. The petal tube is usually mostly glabrous except for the lower petal lobe and the inside of the tube which have long, soft hairs. The 4 stamens are enclosed in the petal tube. Flowering time differs between subspecies but in each case is followed by fruits which are dry, oval shaped and 2.5–3 mm (0.1–0.1 in) long. 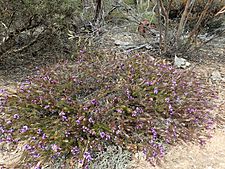 Eremophila densifolia was first formally described by Ferdinand von Mueller in 1861 and the description was published in Fragmenta phytographiae Australiae. The specific epithet (densifolia) is derived from the Latin words densus meaning "thick" or "close" and folia meaning "leaves".

Four subspecies are accepted by the Australian Plant Census:

This eremophila occurs in areas around Ravensthorpe, Esperance, Hyden and Hopetoun in the Esperance Plains biogeographic region. It grows in a variety of soils and habitats and is often abundant after fire.

All subspecies of E. densifolia are classified as "not threatened" by the Western Australian Government Department of Parks and Wildlife.

Variety in the forms of this small eremophila allow it to create an attractive display by dotting around a garden. Its low form make it a suitable container plant or in other places where a low-growing shrub is required. It strikes readily from cuttings and will grow in most soils, although more slowly in clay. It will grow in full sun or partial shade, requires minimal watering in droughts and is very frost hardy.

All content from Kiddle encyclopedia articles (including the article images and facts) can be freely used under Attribution-ShareAlike license, unless stated otherwise. Cite this article:
Eremophila densifolia Facts for Kids. Kiddle Encyclopedia.