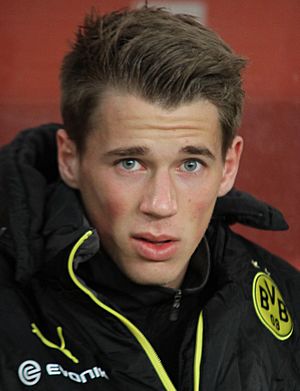 Erik Durm (born 12 May 1992 in Pirmasens) is a German association football defender (football) that plays for Borussia Dortmund and the Germany national football team. He was part of Germany's 2014 FIFA World Cup squad. He made his first appearance for Germany in their draw against Cameroon on 1 June 2014.

All content from Kiddle encyclopedia articles (including the article images and facts) can be freely used under Attribution-ShareAlike license, unless stated otherwise. Cite this article:
Erik Durm Facts for Kids. Kiddle Encyclopedia.