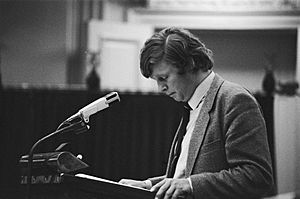 Bakker was merely active in local politics. He served as a councillor of Amsterdam for several years, and was also an alderman from 1992 to 1998. Afterwards he was mayor of Hilversum from 1998 to 2011. In between he was for a brief period a member of the House of Representatives, from 1981 to 1982.

All content from Kiddle encyclopedia articles (including the article images and facts) can be freely used under Attribution-ShareAlike license, unless stated otherwise. Cite this article:
Ernst Bakker Facts for Kids. Kiddle Encyclopedia.