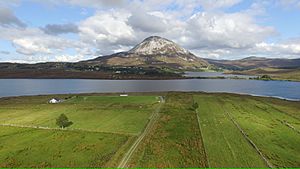 An aerial view of Errigal

Errigal is the most southern, steepest and highest of the mountain chain, called the "Seven Sisters". The Seven Sisters includes Muckish, Crocknalaragagh, Aghla Beg, Ardloughnabrackbaddy, Aghla More, Mackoght and Errigal. The nearest peak is Mackoght (from Irish: Mac Uchta, meaning "son of the mountain-breast") which is also known as Little Errigal or Wee Errigal (Irish: an Earagail Bheag).

Errigal is known for the pinkish glow of its quartzite in the setting sun. Another noted quality is the ever-changing shape of the mountain depending on what direction you view it from. Errigal was voted 'Ireland's Most Iconic Mountain' by Walking & Hiking Ireland in 2009.

Errigal is in legend said to have been named by the Fir Bolg who, originating in Greece, came to worship Errigal as they had Mount Olympus. The name comes from the Latin orare (to pray) and the Greek ekklesia (church). Scholars consider it one of the oldest placenames in Ireland.

A more prosaic origin for the name is from the Old Irish airecal, meaning "oratory". There is no remains of an oratory on the mountain, so it may refer to the mountain as a whole as a place of prayer.

In recent years, there have been numerous erroneous references to Mount Errigal. In 2016, Ireland's national tourism authority, Fáilte Ireland, apologised for using the name "Mount Errigal" in its brochure, rather than the proper name. The official name is An Earagail or Errigal. Mount Errigal is the name of a hotel in Letterkenny, County Donegal.

The mountain is most often climbed from the car park off the R251 road. The route initially starts off by crossing heavily eroded and boggy land towards a visible track through the shiny scree from where the ascent proper starts. After reaching the summit, people usually walk the short but exposed walk along One Man's Pass which leads across to the second and lower of the twin summits. No special equipment is needed to climb the mountain, but caution is advised.

All content from Kiddle encyclopedia articles (including the article images and facts) can be freely used under Attribution-ShareAlike license, unless stated otherwise. Cite this article:
Errigal Facts for Kids. Kiddle Encyclopedia.