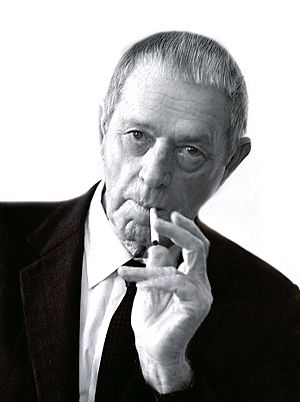 Erskine Caldwell (17 December 1903 – 11 April 1987) was an American writer. He wrote about poverty, racism and social problems in the Southern United States. He did this in novels such as Tobacco Road and God's Little Acre. This work was praised by critics. It also made him controversial among fellow Southerners because they felt he was making them look bad.

All content from Kiddle encyclopedia articles (including the article images and facts) can be freely used under Attribution-ShareAlike license, unless stated otherwise. Cite this article:
Erskine Caldwell Facts for Kids. Kiddle Encyclopedia.