Moreland is a town in Coweta County, Georgia, in the United States. As of the 2010 census, the town population was 399.

The author Erskine Caldwell was born in Moreland in 1903. Newspaper columnist Lewis Grizzard grew up in the town.

The town is home to Moreland Elementary School and First Baptist Church of Moreland. 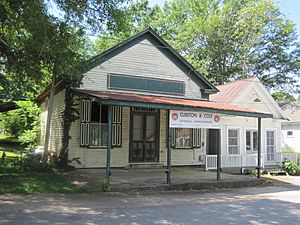 The town of Moreland traces back to the community of the Mt. Zion Methodist Church. This church was built in 1843 for the farmers who had mostly come to this area as part of the Georgia Land Lottery of 1827. Upon the arrival of the Atlanta and West Point Railroad in 1852, the center of this community shifted southward. It had a wood and water stop for trains and was called Puckett Station.

The construction of a train station in 1888 was the event that led to the formation of the present town. The community was renamed Moreland on September 1, 1888 and incorporated on December 28, 1888. The town was laid out with the train station at its center and the boundaries extending one half mile in every direction to form a circular shape.

In the early days of Moreland, cotton was the most important contributor to the local economy. Fruit crops were also a factor including peaches, plums, pears, and grapes. An economic shift occurred during the 1920s after the devastation of the cotton crop by the boll weevil. Diseases and bad weather eventually wiped out the commercial peach orchards.

W.A. Brannon opened a store in 1894 and later other business ventures. Hard economic times forced him out of business and his buildings were sold in 1920. The Moreland Hosiery Mill was located in these buildings for several years. In 1926, new investors bought this property and opened Moreland Knitting Mills. This was the town’s major industrial employer until the business closed in 1968.

Eventually these buildings were donated to the town of Moreland and are now used to house town offices, public meeting spaces, and the Hometown Heritage Museum. Memorabilia that was once displayed in the Lewis Grizzard Museum in an old service station was moved the historic Moreland Mill on Main St. in 2011. 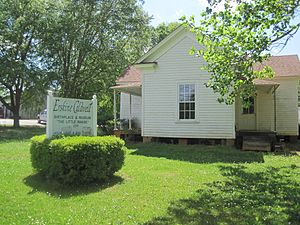 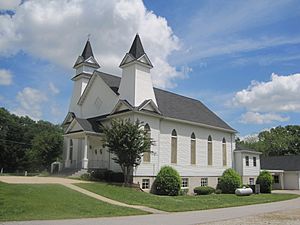 According to the United States Census Bureau, Moreland has a total area of 0.93 square miles (2.4 km2), all of it land.

There were 150 households out of which 33.3% had children under the age of 18 living with them, 52.0% were married couples living together, 14.7% had a female householder with no husband present, and 27.3% were non-families. 24.0% of all households were made up of individuals and 12.7% had someone living alone who was 65 years of age or older. The average household size was 2.62 and the average family size was 3.12.

All content from Kiddle encyclopedia articles (including the article images and facts) can be freely used under Attribution-ShareAlike license, unless stated otherwise. Cite this article:
Moreland, Georgia Facts for Kids. Kiddle Encyclopedia.