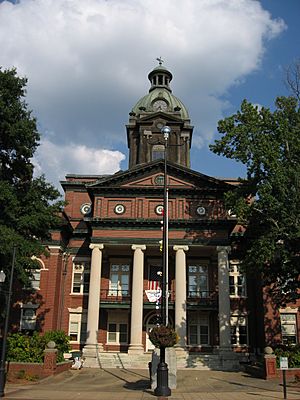 Newnan was established as county seat of Coweta County (replacing the defunct town of Bullsboro) in 1828 and was named for North Carolinian General Daniel Newnan. It quickly became a prosperous magnet for lawyers, doctors, other professionals, and merchants. Much of Newnan's prosperity was due to its thriving cotton industry, which relied on slavery.

Newnan was largely untouched by the Civil War due to its status as a hospital city (for Confederate troops), and as a result still features much antebellum architecture. Celebrated architect Kennon Perry designed many of the town's 20th century homes. During the Atlanta Campaign, Confederate cavalry defeated Union forces at the nearby Battle of Brown's Mill.

The city is home to one of the few Georgia counties with a museum that focuses mainly on African American history. The Coweta County African American Heritage Museum and Research Center, or Caswell House, was opened in July 2003 in a donated mill village house once owned by Ruby Caswell. The museum sits on Farmer Street on an old, unmarked, slave cemetery. It has collected hundreds of family genealogical records by interviewing residents and going through the census records. The museum also houses the Coweta Census Indexes from 1870 to 1920.

The first black library in the county was the Sara Fisher Brown Library. Built in the 1950s, the library has since been converted into the Community Action For Improvement Center.

The Farmer Street Cemetery is the largest slave cemetery in the South, and may be the largest undisturbed one in the nation. It is within the city limits of Newnan. 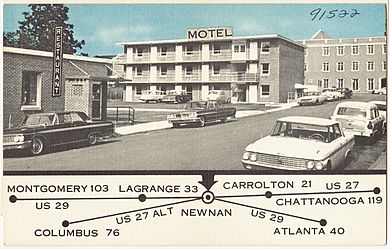 "Heart of Newnan Motel", postcard from the 1960s

The Coweta County School District holds preschool to grade 12, and consists of 19 elementary schools, seven middle schools, and three high schools. The district has 1,164 full-time teachers and over 18,389 students.

Mercer University has a regional academic center in Newnan. The center opened in 2010, and offers programs through the university's College of Continuing and Professional Studies.

The University of West Georgia has a campus located in Newnan, near downtown. This campus currently has two undergraduate programs - bachelor of science in nursing and early childhood education.

Newnan is also home to a campus of West Georgia Technical College.

Until the mid-1950s the Central of Georgia operated two trains daily in each direction, through Newnan from Atlanta to Columbus, in its Man O' War service. The Central continued a single Man O' War train until 1971 when Amtrak took over most interstate passenger service. Until 1970, the city was a stop on the Southern Railway's Crescent from New Orleans to New York City, via Atlanta. Into the mid-1960s, the Southern's Crescent and Piedmont Limited made stops in both directions in Newnan.

All content from Kiddle encyclopedia articles (including the article images and facts) can be freely used under Attribution-ShareAlike license, unless stated otherwise. Cite this article:
Newnan, Georgia Facts for Kids. Kiddle Encyclopedia.