Eucalyptus bosistoana, commonly known as the coast grey box or Bosisto's box, is a tree that is endemic to south-eastern Australia. It has rough, flaky bark at the base of its trunk, smooth cream yellow or grey bark above and sometimes throughout, the smooth bark shed in ribbons. The adult leaves are lance-shaped to curved and the flower buds are arranged in groups of seven. The flowers are white and the fruit is a cup-shaped, barrel-shaped or hemispherical capsule. 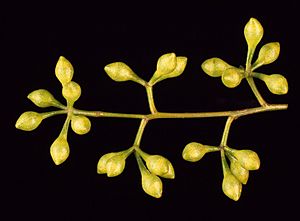 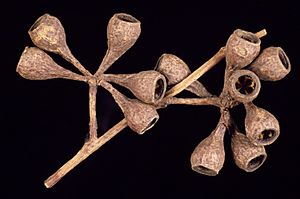 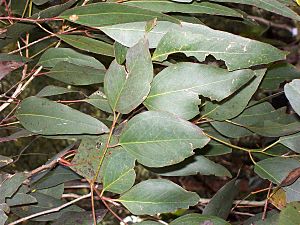 Eucalyptus bosistoana was first formally described in 1895 by Ferdinand von Mueller. The description was published in the Australasian Journal of Pharmacy. The specific epithet (bosistoana) honours Joseph Bosisto, who was one of the first in Australia to extract essential oils, especially eucalyptus oil.

Coast grey box occurs in New South Wales and Victoria from as far north as the Wolgan Valley, west of Sydney and as far south as eastern Gippsland. It is found near streams in lowland areas on better quality soils, particularly over limestone, although it may also appear on the tablelands up to 500 m (1,600 ft) above sea level, near Goulburn and Bungonia. Eucalyptus bosistoana is seen growing with E. cypellocarpa, E. longifolia, E. paniculata, E. sideroxylon, Corymbia maculata, E. angophoroides, E. elata, E. muelleriana, E. globoidea and other trees such as Casuarina cunninghamiana.

A significant timber species, resistant to termites though susceptible to lyctus borers. The interlocked grain timber is highly regarded for heavy engineering. Other uses include construction, piles, poles and sleepers. A durable timber of considerable weight, being 1100 kilograms per cubic metre.

All content from Kiddle encyclopedia articles (including the article images and facts) can be freely used under Attribution-ShareAlike license, unless stated otherwise. Cite this article:
Eucalyptus bosistoana Facts for Kids. Kiddle Encyclopedia.