Eucalyptus capitellata, commonly known as brown stringybark, is a species of tree that is endemic to New South Wales. It is a small to medium-sized tree with rough, stringy bark from the trunk to the thinnest branches, lance-shaped to curved adult leaves, spindle-shaped or oblong flower buds in groups of seven or more, white flowers and clusters of flattened hemispherical fruit. 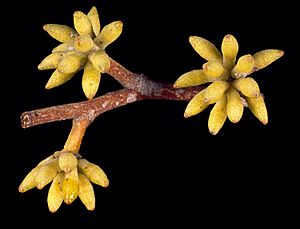 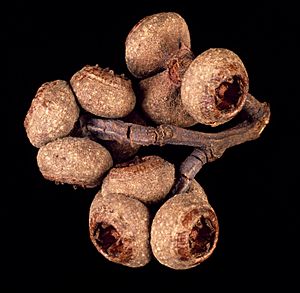 Eucalyptus capitellata was first formally described in 1795 by James Edward Smith in his book, A Specimen of the Botany of New Holland. Smith noted that a drawing of the fruit of this species had previously been published on page 226 of the book by First Fleet surgeon and naturalist John White, Journal of a Voyage to New South Wales but incorrectly ascribed to Eucalyptus piperita.

The specific epithet (capitellata) is a Latin word meaning "with a little head", possibly referring to the clusters of fruit.

All content from Kiddle encyclopedia articles (including the article images and facts) can be freely used under Attribution-ShareAlike license, unless stated otherwise. Cite this article:
Eucalyptus capitellata Facts for Kids. Kiddle Encyclopedia.