Eufaula Dam is a dam across the Canadian River in Oklahoma. Completed in 1964, it impounds Eufaula Lake, one of the world's largest man-made lakes, covering 102,500 acres (41,500 hectares). The dam serves to provide flood control, water supply, navigation and hydroelectric power generation. It supports a 90 MW power station; three generators produce 30 MW each.

State Highway 71 runs across the top of the dam. 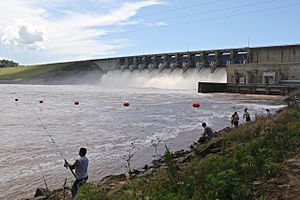 The dam was approved by Rivers and Harbors Act of 1946 and construction began in December 1956. The cost of the project, completed by the U.S. Army Corps of Engineers, was $121,735,000. The flood-control operations of the dam were in place by February 1964, and the dam dedicated by President Lyndon B. Johnson on September 25, 1964.

Heavy rains in the spring of 2015, caused Eufaula Lake to rise so rapidly that the Corps of Engineers had to open the flood gates and release water at rates as high as 48,000 cubic feet (1,400 m3) per second. This was the highest rate since 1990.

All content from Kiddle encyclopedia articles (including the article images and facts) can be freely used under Attribution-ShareAlike license, unless stated otherwise. Cite this article:
Eufaula Dam Facts for Kids. Kiddle Encyclopedia.