The Zebra Swallowtail (Eurytides marcellus) is a North American butterfly. It is in the family Papilionidae. Some authors place the species under the genera Iphiclides, Graphium, and Papilio. Its obvious black and white-striped pattern is like the pattern of a zebra. The Zebra Swallowtail is the official state butterfly of Tennessee. 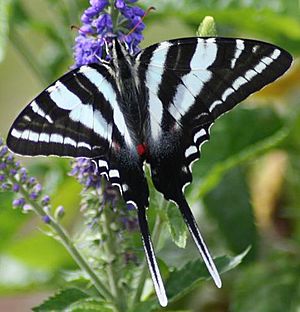 The Zebra Swallowtail has triangle-shaped wings. It has long tails on the hind wings (the bottom wings). It has some black and white markings on its wings. There are some small red and blue markings on the hind wings. There are two seasonal forms. Spring forms are more white. They have small black tails with white tips. Summer forms are more black. They have longer tails with more white in them. The wingspan is 2 2/5 to 3 1/2 inches.

This species is found in the eastern United States and southeastern Canada.

This butterfly can be found in a variety of habitats near pawpaw trees. Such habitats include open woodlands, grassy fields, savannas, and southern pine woods.

Females lay their eggs singly on pawpaw leaves. They are sometimes laid on the tree trunks. The egg is pale green. After three days it turns an orange-brown color. It turns dark gray just before hatching. The caterpillars are cannibalistic (this means that two individuals of the same species will eat each other). Young caterpillars are black. Older caterpillars have two different color forms. The more common form is green. It has yellow and white stripes. There is a tricolor (meaning it has three colors) band that is bluish-white, black, and yellow. The more rare form is black with white and orange stripes. The caterpillar has a bad smelling, forked gland called an osmeterium. It is found just behind the head. It will use the osmeterium to scare predators. The osmeterium can pull back inside the head when the caterpillar is not using it. The chrysalis is either green or brown. The chrysalis hibernates. It has 1-2 broods per year in the northern part of its range. It has 3-4 broods per year in the southern part of its range.

Here is a list of host plants that the Zebra Swallowtail caterpillar feeds on:

All content from Kiddle encyclopedia articles (including the article images and facts) can be freely used under Attribution-ShareAlike license, unless stated otherwise. Cite this article:
Eurytides marcellus Facts for Kids. Kiddle Encyclopedia.