Kids Encyclopedia Facts
This page is about the various species of pawpaws in the American plant genus Asimina. For the common pawpaw of eastern North America, see Asimina triloba. For the unrelated tropical papaya fruit often called 'papaw' or 'pawpaw', see Carica papaya. For other uses, see Paw Paw (disambiguation).

Asimina is a genus of small trees or shrubs described as a genus in 1763.

Asimina has large simple leaves and large fruit. It is native to eastern North America and collectively referred to as pawpaw. The genus includes the widespread common pawpaw Asimina triloba, which bears the largest edible fruit indigenous to the United States. Pawpaws are native to 26 states of the U.S. and to Ontario in Canada. The common pawpaw is a patch-forming (clonal) understory tree found in well-drained, deep, fertile bottomland and hilly upland habitat. Pawpaws are in the same plant family (Annonaceae) as the custard-apple, cherimoya, sweetsop, soursop, and ylang-ylang; the genus is the only member of that family not confined to the tropics. 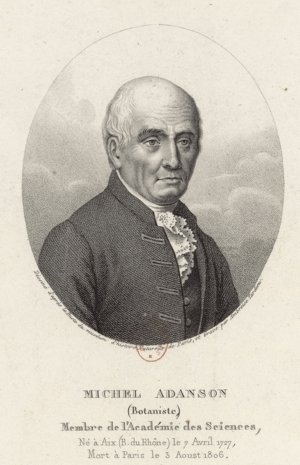 The genus name Asimina was first described and named by Michel Adanson, a French naturalist of Scottish descent. The name is adapted from the Native American name assimin through the French colonial asiminier.

The common name (American) pawpaw, also spelled paw paw, paw-paw, and papaw, probably derives from the Spanish papaya, perhaps because of the superficial similarity of their fruits. 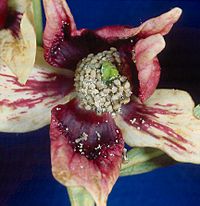 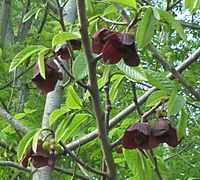 Pawpaws are shrubs or small trees to 2–12 m (6.6–39.4 ft) tall. The northern, cold-tolerant common pawpaw (Asimina triloba) is deciduous, while the southern species are often evergreen.

The flowers of pawpaws are produced singly or in clusters of up to eight together; they are large, 4–6 cm across, perfect, with six sepals and petals (three large outer petals, three smaller inner petals). The petal color varies from white to purple or red-brown.

Species and their distributions

The common pawpaw is native to shady, rich bottom lands, where it often forms a dense undergrowth in the forest, often appearing as a patch or thicket of individual small slender trees.

Pawpaw flowers are insect-pollinated, but fruit production is limited since few if any pollinators are attracted to the flower's faint, or sometimes non-existent scent. The flowers produce an odor similar to that of rotting meat to attract blowflies or carrion beetles for cross pollination. Other insects that are attracted to pawpaw plants include scavenging fruit flies, carrion flies and beetles. Because of difficult pollination, some believe the flowers are self-incompatible.

Pawpaw fruit may be eaten by foxes, opossums, squirrels and raccoons. Pawpaw leaves and twigs are seldom consumed by rabbits or deer.

The leaves, twigs, and bark of the common pawpaw tree contain natural insecticides known as acetogenins.

Larvae of the zebra swallowtail butterfly feed exclusively on young leaves of the various pawpaw species, but never occur in great numbers on the plants.

The paw paw is considered an evolutionary anachronism, where a now-extinct evolutionary partner, such as a Pleistocene megafauna species, formerly consumed the fruit and assisted in seed dispersal. 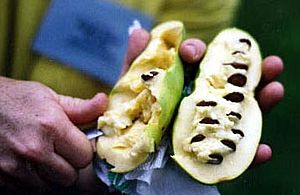 Asimina triloba is often called prairie banana because of its banana-like creamy texture and flavor.

Wild-collected fruits of the common pawpaw (Asimina triloba) have long been a favorite treat throughout the tree's extensive native range in eastern North America. Fresh pawpaw fruits are commonly eaten raw; however, they do not store or ship well unless frozen. The fruit pulp is also often used locally in baked dessert recipes, with pawpaw often substituted in many banana-based recipes.

Pawpaws have never been cultivated for fruit on the scale of apples and peaches, but interest in pawpaw cultivation has increased in recent decades. However, only frozen fruit will store or ship well. Other methods of preservation include dehydration, production of jams or jellies, and pressure canning.

The pawpaw is also gaining in popularity among backyard gardeners because of the tree's distinctive growth habit, the appeal of its fresh fruit, and its relatively low maintenance needs once established. The common pawpaw is also of interest in ecological restoration plantings since this tree grows well in wet soil and has a strong tendency to form well-rooted clonal thickets.

The several other species of Asimina have few economic uses.

The earliest documentation of pawpaws is in the 1541 report of the Spanish de Soto expedition, who found Native Americans cultivating it east of the Mississippi River. Chilled pawpaw fruit was a favorite dessert of George Washington, and Thomas Jefferson planted it at his home in Virginia, Monticello. The Lewis and Clark Expedition sometimes subsisted on pawpaws during their travels. Daniel Boone was also a consumer and fan of the pawpaw. The common pawpaw was designated as the Ohio state native fruit in 2009.

All content from Kiddle encyclopedia articles (including the article images and facts) can be freely used under Attribution-ShareAlike license, unless stated otherwise. Cite this article:
Asimina Facts for Kids. Kiddle Encyclopedia.