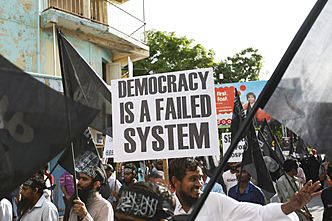 Demonstration against democracy on the Maldives: the people demostrating want to introduce Sharia (Islamic law)

Political views and ideas which are far from the mainstream are called extremist. Such views often violate common moral standards. As an example, a group that wants to replace a democratic form of government with a totalitarian one is almost always considered extremist. Political or religious fundamentalism as well as fanaticism can also be seen as extremist.

All content from Kiddle encyclopedia articles (including the article images and facts) can be freely used under Attribution-ShareAlike license, unless stated otherwise. Cite this article:
Extremism Facts for Kids. Kiddle Encyclopedia.