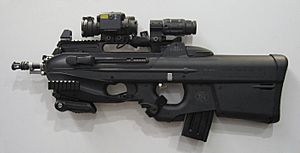 The F2000S used by the Slovenian Army 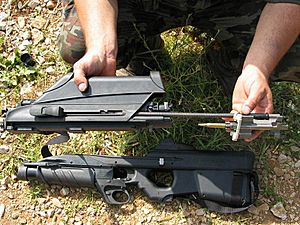 The F2000 has been in production since 2001. It is used in many countries including Belgium, Libya, Peru, Saudi Arabia, Pakistan and more. The F2000 is a replacement of the FN FNC.

All content from Kiddle encyclopedia articles (including the article images and facts) can be freely used under Attribution-ShareAlike license, unless stated otherwise. Cite this article:
FN F2000 Facts for Kids. Kiddle Encyclopedia.