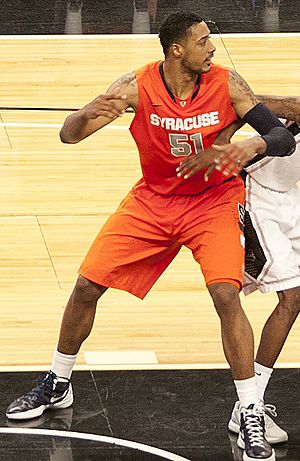 Fabricio "Fab" Paulino de Melo (20 June 1990 – 11 February 2017) was a Brazilian professional basketball player. He played as a center. In the United States, he played for the Boston Celtics of the National Basketball Association (NBA) and Syracuse Orange. In Brazil, he played for LSB and Brasília of the Novo Basquete Brasil (NBB).

Melo was born in Juiz de Fora, Minas Gerais. He moved to the U.S. and graduated from high school in 2010.

All content from Kiddle encyclopedia articles (including the article images and facts) can be freely used under Attribution-ShareAlike license, unless stated otherwise. Cite this article:
Fab Melo Facts for Kids. Kiddle Encyclopedia.