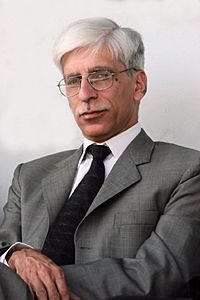 Faisal Masud (Urdu: فيصل مسعود) ( 16 October 1954 – 16 August 2019) was a Pakistani educator and physician. He was the vice-chancellor of the University of Health Sciences and a vice-chancellor of the King Edward Medical University, Lahore from January 2013 through February 2017. He also was the principal of Services Hospital and Services Institute of Medical Sciences in Lahore, Pakistan.

His area of interest was endocrinology. He was awarded the tamgha-e-imtiaz for his role in dengue epidemic.

All content from Kiddle encyclopedia articles (including the article images and facts) can be freely used under Attribution-ShareAlike license, unless stated otherwise. Cite this article:
Faisal Masud Facts for Kids. Kiddle Encyclopedia.