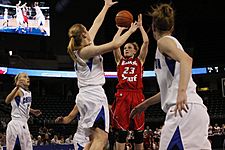 Illinois State vs Creighton in the 2013 MVC Women's Basketball Tournament

The Family Arena ice hockey rink set up for the St. Charles Chill

Currently it is home to the St. Louis Ambush of the Major Arena Soccer League.

From 2008 to 2015, the Family Arena was host to the Missouri Valley Conference Women's Basketball Tournament.

The Family Arena has served as an annual location for one of many world wide regional Bible conventions hosted by Jehovah's Witnesses. The Christian rock band MercyMe performed at Family Arena annually from 2007 until 2013.

The arena has hosted commencement ceremonies for Lindenwood University, Missouri Baptist University and Maryville University as well as for several area high schools.

The 2017 NCAA National Collegiate Women's Ice Hockey Tournament known as the "Frozen Four" was held at the Family Arena in 2017. The quarterfinals were contested at the campuses of the seeded teams on March 11, 2017. The "Frozen Four" was played on March 17 and 19, 2017 at Family Arena with Lindenwood University serving as the host. An agreement with the Big Ten Network resulted in the championship game being televised live for the first time since 2010. The tournament was won by [[{{{school}}}|Clarkson]] with a 3–0 win over Wisconsin, giving the Golden Knights their second title in program history.

All content from Kiddle encyclopedia articles (including the article images and facts) can be freely used under Attribution-ShareAlike license, unless stated otherwise. Cite this article:
Family Arena Facts for Kids. Kiddle Encyclopedia.