Farida Hisham Osman (Arabic: فريدة هشام عثمان‎code: ar is deprecated ; born 18 January 1995) is an Egyptian competitive swimmer who specializes in butterfly and freestyle events. An All-Africa Games gold medalist and Egyptian national champion and record-holder. Osman is the fastest female swimmer in Egypt and Africa, she is currently coached by Teri McKeever. Osman holds the senior national records for all the butterfly, freestyle and backstroke events, as well as African records in the 50m and 100m butterfly.

Daughter to dentists Hisham Osman and Randa Elsalawy, Osman was born in Indianapolis, Indiana in 1995, and raised in Cairo, Egypt. She started swimming at the age of five at the Gezira Sporting Club with her brother Ahmed. Osman started at the Oasis French School in Cairo, but then transitioned to the French Embassy's Lycée Français du Caire. She studied at the Cairo American College.

Osman took a break from swimming to pursue her synchronized swimming passion. At the age of 11, she returned to swimming and won all the 50m and 100m freestyle and butterfly national titles, earning the "Best Swimmer" trophy. At the age of 12, she was selected to represent Egypt at the 11th Pan Arab Games in Cairo, Egypt. She was the youngest athlete on the team and participated in the 50m, 100m freestyle and the 50m and 100m butterfly. Osman broke the Arab record for the 50m butterfly where she became the youngest Egyptian and Arab athlete to ever win the event and break the record. She finished 6th in the 100m butterfly. 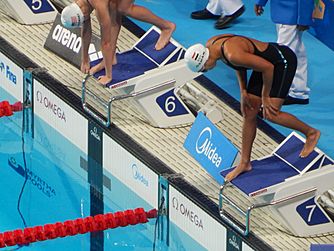 The same year she competed at the All Africa Games and finished fifth in the 50m butterfly with a time of 28.95.

Osman continued her career by participating in various international competitions such as the International Sindlefingen Swimming Competition (ISSC) where she competed in all sprint events in backstroke, butterfly and freestyle. She received the 2nd-place trophy for best sprinters in the competition.

At 13, Osman traveled to the United States for a summer camp, where she swam for the Bear Swimming Team in Berkeley, California. She participated in various competitions such as RESLs, Junior Olympics, Sectionals and Far Westerns where she was in the top 10 places of her year group.

At the 3rd FINA FINA World Junior Swimming Championships, which were held in Lima, Peru, Osman was one of the biggest surprised at the competition. In a world junior championship record time of 26.69, she became world junior champion in the 50m butterfly, placing Egypt 11th on the medalists charts, the highest rank any African or Arab nation has reached in a long time. In the 100m butterfly, Osman placed 15th with a time of 1:02.18.

Shortly after the world championships, Osman went to Mauritius to represent Egypt at the 8th Junior African Champrionship. She placed 1st in the 50m freestyle, setting a new Junior African record with a time of 26.36. Similarly, in the 50m Butterfly, her apparently strongest event, she broke another Junior African record with a time of 27.60. Dominating in the sprinting events, Osman also won the gold medal in the 50m backstroke with a record time of 31.04. In her remaining events, Osman won the silver medal in the 100m butterfly with a time of 1:03.16, finishing second to South Africa's Vanessa Mohr. In both the 100m freestyle and 100m backstroke, Osman finished 3rd place.

At the 2012 Summer Olympics in London, United Kingdom, Osman represented Egypt in the 50m freestyle event beside her teammate Shehab Younis. Osman finished 42nd with a time of 26.34.

At the 2013 World Aquatics Championships in Barcelona, Spain, Osman competed in four events. On the first day, Osman competed in the 100m butterfly, finishing 24th with a time of 59.85s. On the fifth day of competition, she swam the 100m freestyle while finishing 40th with a 56.84s. On the sixth day of competition, Osman finished 11th in the heats of her signature event, 50m butterfly while advancing to the semi-finals and finishing with a new African Record of 26.12s. Osman is the first Egyptian to qualify for a final at the World Aquatics Championships in the Egyptian history. On 3 August 2013, Osman finished 7th in the women's 50m butterfly final with a time of 26.17s respectively for Egypt. This is the best ranking ever by an Egyptian pool swimmer in a major international competition.

At the 2017 FINA World Championships, Osman competed for Egypt and won the bronze model in the 50m butterfly event with the new African record of 25.39s. In the 50m freestyle event, she also set a new African record at 24.62s, which gave her the 9th place.

She was named the Best Female Athlete from Africa by the Association Of National Olympic Committees (ANOC) in 2017.

She was awarded the Mohamed Bin Rashed Al Maktoum Creative Sport Award for Distinguished Athlete Achievement in Sport in 2017.

She was selected as the 2017 Female African Swimmer of the Year by the Swimming World magazine.

She was the recipient of the Tom Hansen Medal as the top female athlete for the 2016/17 season at the University of California Berkeley.

All content from Kiddle encyclopedia articles (including the article images and facts) can be freely used under Attribution-ShareAlike license, unless stated otherwise. Cite this article:
Farida Osman Facts for Kids. Kiddle Encyclopedia.