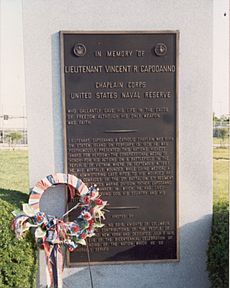 Monument to Vincent Capadanno, at the corner of Sand Lane and Father Capodanno Boulevard

Fr. Capodanno Boulevard was originally conceived by New York City parks commissioner Robert Moses, as the northernmost stretch of a planned limited-access highway to be named Shore Front Drive. The road was built in 1955–1958 as Seaside Boulevard, as part of an improvement to the boardwalk. The first section of the boulevard opened in 1957. The name was changed in 1976 to honor Vincent R. Capodanno, a local Roman Catholic chaplain who was killed in the Vietnam War in 1967.

The road exists today as the primary boulevard for the communities and public parks of Staten Island's East Shore. The road currently consists of six vehicular lanes: four driving lanes, a parking lane with turning bays southbound and a bus lane northbound. Previously existing bicycle lanes were removed in 2010 "without any discernible public process". Northbound and southbound traffic is divided by a grassy center median. To avoid Hylan Boulevard's traffic congestion, Father Capodanno Boulevard is also used as a "short cut" to the Verrazzano-Narrows Bridge by residents of the island's more inland and southern communities.

The entire boulevard suffered extensive damage and flooding during Hurricane Sandy in October 2012.

All content from Kiddle encyclopedia articles (including the article images and facts) can be freely used under Attribution-ShareAlike license, unless stated otherwise. Cite this article:
Father Capodanno Boulevard Facts for Kids. Kiddle Encyclopedia.