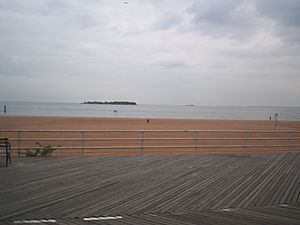 Hoffman Island on left and Swinburne Island on the right as seen from the boardwalk at South Beach, Staten Island

South Beach is a neighborhood on the East Shore of Staten Island, one of the five boroughs of New York City, USA. It is situated immediately to the south of the Staten Island side of the Verrazano Narrows Bridge. Directly east of the beach is Hoffman Island, and Swinburne Island. FDNY Engine Company 161/Ladder Company 81 serves South Beach. 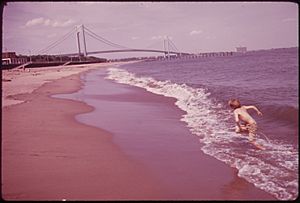 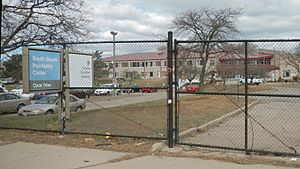 Once referred to as Graham Beach, the area was originally a summer beach colony consisting of many bungalows and tents. Located nearby was Warren Manor, a residential development that was demolished in the 1950s to make way for a proposed new City University campus that was never built.

In the early 20th century, many summer homes dotted the neighborhood, including an organized development known as Bungalowtown. South Beach was the terminus of the South Beach Branch of the Staten Island Railway, on which service was halted in 1953; by the 1980s the tracks of this line had been uprooted, and tract homes now stand on the original right-of-way in most places. Today, Railroad Avenue and the Robin Road Trestle are the only evidence left behind.

Small amusement parks and arcades, such as the Happyland Amusement Park, once flourished there, but virtually all had disappeared by the 1970s; the last one closed in 2006. The City of New York built a public housing project in the neighborhood in 1949; it is one of only three such projects found on the island south of the Staten Island Expressway.

The neighborhood's principal thoroughfare was originally named Seaside Boulevard, and, as its name suggested, it runs parallel to the shoreline, with the South Beach-Franklin Delano Roosevelt Boardwalk flanking it on the shoreward side. This roadway, which was the only portion of the "Shore Front Drive" proposed by Robert Moses to be actually built, was later renamed Father Capodanno Boulevard, after a Roman Catholic chaplain who was killed in action during the Vietnam War, and runs from near the Verrazano Bridge to Midland Beach.

In the early 20th century, many Italian-Americans, including immigrants, settled in the neighborhood, and their descendants still form the majority of the community's population. 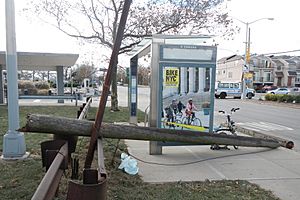 The southernmost tip of South Beach is called Ocean Breeze. Situated in a low-lying coastal area, Ocean Breeze often experiences the worst flood-related damage in all of Staten Island after heavy rain has fallen, and many of the neighborhood's side streets become impassable. Because of the flooding that results from the low-lying terrain, the New Creek bluebelt, which collects rainwater after storms, runs through the area.

South Beach is served by a number of local and express buses. South Beach was served by the Staten Island Railway until March 31, 1953.

All content from Kiddle encyclopedia articles (including the article images and facts) can be freely used under Attribution-ShareAlike license, unless stated otherwise. Cite this article:
South Beach, Staten Island Facts for Kids. Kiddle Encyclopedia.