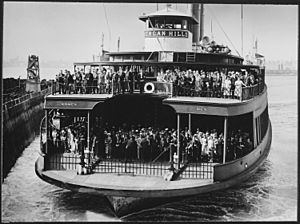 Dongan Hills is a neighborhood located within the New York City borough of Staten Island. It is on the Island's East Shore.

The neighborhood was originally known by two separate names, the western half being called Hillside Park and the eastern half Linden Park. The name of Dongan Hills was originally Garretson's and it was changed to Dongan Hills to avoid confusion with Garrison on Hudson. The neighborhood was renamed for Thomas Dongan, the Irish-born governor of the Province of New York after the Kingdom of England acquired it from the Netherlands in 1682. The "hills" alluded to in the name are the eastern ridge of Todt Hill, and much of what is colloquially referred to as "Todt Hill" by most island residents is reckoned as belonging to Dongan Hills by more authoritative sources such as the Staten Island Advance. However, there is a section of Dongan Hills that contains large hills. This portion of the neighborhood is called, the Dongan Hills Colony. "The Colony" is located above Richmond Road and borders the neighborhood of Todt Hill.

The neighborhood is also home to FDNY Engine Company 159, and quartered with it, Satellite 5.

Dongan Hills was one of the first Staten Island neighborhoods to witness an upsurge in home construction after World War II, as many small, one-family homes were built there during the 1950s, and the city also built a public housing project in the community; known as the General Berry Houses, it is the southernmost public housing project on Staten Island. Population growth accelerated in the area when the Verrazano-Narrows Bridge linking Staten Island with Brooklyn was opened in November 1964. Indeed, recent arrivals from Brooklyn have overwhelmed the descendants of the original residents, and now form a majority of the neighborhood's population.

Most of the residents are Italian American, with a fairly small amount of other residents being of Irish, and in some areas of it are other ethnicities.

The Billiou-Stillwell-Perine House was listed on the National Register of Historic Places in 1976.

Dongan Hills is served by the Staten Island Railway station of the same name.

All content from Kiddle encyclopedia articles (including the article images and facts) can be freely used under Attribution-ShareAlike license, unless stated otherwise. Cite this article:
Dongan Hills, Staten Island Facts for Kids. Kiddle Encyclopedia.