Fauna of Borneo facts for kids 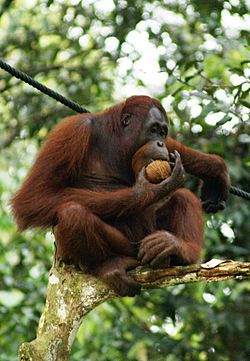 Orang Utan (Pongo pygmaeus) is among the most iconic animals of Borneo and the flagship of rainforest conservation in South-East Asia.

Borneo is the third largest island in the world. In prehistoric times it was connected to the Asian mainland due to geological and climate changes. During the recent ice ages of the Pleistocene and the Holocene separation from the mainland caused extinctions and speciation of fauna on the island.

The high complexity of the Bornean tropical rain forest has created many niches that accommodate a rich diversity of fauna. Some fauna are specialised and some coexisted by having niche separation to avoid inter- and intra-specific competition within the same habitat. Ecological separation can be in the form of different feeding guilds, niche separation by stratification and different utilisation strategies by being diurnal or nocturnal. For example, vertebrate fauna (birds and mammals) can be defined into six communities based on vertical stratification of the rainforest. First, the small mammals and birds use the forest ground floor and underground. Second, the large herbivores and carnivorous animals range the ground floor of the forest searching for food, shelter and breed. Third, omnivorous and carnivorous mammals range up and down tree trunk from forest floor to the canopy level. Fourth, are mainly volant mammals such as bats and birds using the middle canopy. Fifth, are top canopy birds and mammals that feed on leaves, fruits, nectar and insects. Sixth, are the fast flying birds and bats using the above canopy area.

There are 639 species of ants, 81 genera and 8 subfamilies of the Formicidae in Poring Sabah.

There are 394 species of freshwater fish and 149 are endemic to Borneo.

There are 100 species of amphibians.

One notable species is the Bornean flat-headed frog, Barbourula kalimantanensis. This frog, found in cold, fast-flowing mountain streams, is the only known lungless frog.

105 species of lizards, in 35 genera from nine families, are now known from Borneo. The reticulated python is the biggest python in the world, and the longest snake in the world. This reptile can have a size of 6 m or more. The longer snakes have a size of ten meters.

The historical records of European association with Borneo and its fauna were compiled by Lord Medway that was published in 1977 by the Malaysian Branch of the Royal Asiatic Society. There are 288 species of terrestrial mammals in Borneo which is dominated by the chiroptera (102 species of bats) and rodentia (61 species of rats and mice), and 44 species are endemic to the island. There have also been 91 species of marine mammals recorded within the territorial boundaries of Malaysia, Indonesia and Brunei. Taxonomic list of species are found in the Mammals of Borneo.

Impact of deforestation on fauna

All content from Kiddle encyclopedia articles (including the article images and facts) can be freely used under Attribution-ShareAlike license, unless stated otherwise. Cite this article:
Fauna of Borneo Facts for Kids. Kiddle Encyclopedia.