Federation Forest State Park is a 619-acre (251 ha) Washington state park on the White River in King County. The park is located 15 miles (24 km) east of Enumclaw on Route 410 about 30 miles (48 km) below the summit of Chinook Pass. The park features an old-growth forest that includes Douglas fir, western hemlock, Sitka spruce, and western redcedar trees. Park amenities include 7 miles (11 km) of hiking trails, picnicking facilities, and an interpretive center. 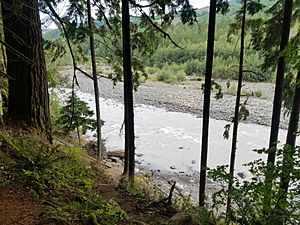 White River viewed from the park

The park gets its name from the Washington state chapter of the General Federation of Women's Clubs (GFWC-WS), which raised the initial $25,000 that was used to purchase the land for the park from a lumber company in 1928. GFWC-WS members were concerned about the rapid pace of deforestation around the country and wanted to preserve the remaining old-growth forest in the state of Washington. The original park was located about 8 miles (13 km) west of Snoqualmie Pass and was dedicated in 1934. In the following years, windstorms, widening of an adjacent highway, and logging on the adjacent property took a toll on the park, and the land was eventually sold back to the lumber company in 1938.

After about a decade, the new present-day location along the White River was chosen and dedicated in 1949. In 1958, local educator and GFWC-WS member, Catherine Montgomery donated the money from her estate to the park. The money was used to build the Catherine Montgomery Interpretive Center.

All content from Kiddle encyclopedia articles (including the article images and facts) can be freely used under Attribution-ShareAlike license, unless stated otherwise. Cite this article:
Federation Forest State Park Facts for Kids. Kiddle Encyclopedia.