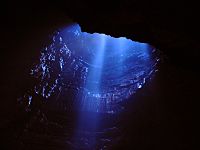 Fell Beck is a stream located near the foot of Ingleborough, in the Yorkshire Dales National Park. It is notable for the fact that it runs into Gaping Gill, the second-largest natural cave shaft in the UK (after Titan). As it falls down the shaft for 110 metres it is the tallest unbroken waterfall in the UK. It later emerges as Clapham Beck in Beck Head Cave, adjacent to Ingleborough Cave. This was confirmed by cave divers in 1983, and by fluorescent dye tests many years before. At times it is blocked off by a temporary dam to allow members of the public to descend the shaft on a winch.

All content from Kiddle encyclopedia articles (including the article images and facts) can be freely used under Attribution-ShareAlike license, unless stated otherwise. Cite this article:
Fell Beck Facts for Kids. Kiddle Encyclopedia.