Fennville is a city in Allegan County in the U.S. state of Michigan. The population was 1,398 at the 2010 census. 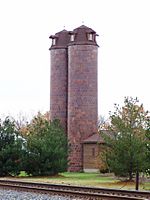 The "official" and widely accepted account of how the city came to be known as Fennville, is that an early white settler by the name of Elam Atwater Fenn built a saw mill in the immediate vicinity of the current community. This led to people referring to the settlement as "Fenn's Mill" which became the name associated with the post office there. Some early documents pluralized "Mill" to render "Fenn's Mills." The first road through what was to be Fennville was built by Harrison Hutchins and James McCormick in 1837.

A fire (possibly related to the Great Chicago Fire or Great Michigan Fire) destroyed the village in October 1871. About that time, the paperwork (timetables and such) for the recently completed Chicago and Michigan Lake Shore Railroad arrived which identified the community's station as "Fennville." This was thought by some at the time (including Hutchins) to have been the result of clerical error. However, Fenn himself recorded that the change in name had been suggested by and mutually agreed upon among certain leaders of the community in conjunction with the establishment of the new railroad station. The post office name was then changed to "Fennville" to match the station's name. The community was officially incorporated as the village of Fennville on February 20, 1889.

A United States atlas from 1895 indicates the town name was in some cases broken into two words, as in "Fenn Ville." Yet another documented variation was "Fennsville" as found in a plat book from 1873. See References below.

There were 505 households, of which 45.9% had children under the age of 18 living with them, 42.2% were married couples living together, 17.8% had a female householder with no husband present, 8.5% had a male householder with no wife present, and 31.5% were non-families. 26.7% of all households were made up of individuals, and 8.7% had someone living alone who was 65 years of age or older. The average household size was 2.77 and the average family size was 3.36.

The Discovery Elementary School, a chartered public school academy located in Fennville, closed at the end of the 2009 school year.

All content from Kiddle encyclopedia articles (including the article images and facts) can be freely used under Attribution-ShareAlike license, unless stated otherwise. Cite this article:
Fennville, Michigan Facts for Kids. Kiddle Encyclopedia.