Allegan is a city in the U.S. state of Michigan. Its population was 4,998 at the 2010 census. It is the county seat of Allegan County. It lies within Allegan Township but is administratively autonomous.

Allegan was named in a neologism by Michigan historian Henry Rowe Schoolcraft in 1837 to sound like a Native American word. Land was purchased from government to form the downtown business district; village organization came in 1838 with city incorporation authorized in 1907.

Allegan is in the south-central portion of the county. To the west and northwest is the nearly 50,000 acre forest Allegan State Game Area for which the city is considered a gateway. Lake Allegan in Valley Township is also a tourist destination for boating, fishing, and swimming.

Allegan's dense forests, lakes, and river geography served as a source of water power, trade routes for steamboats, and timber production. Once cleared, it became a center for business, industry and expansive farmland. 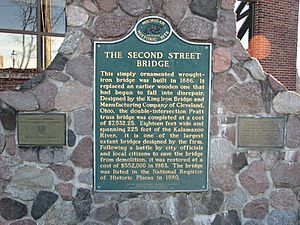 The men after whom Allegan's downtown streets were named – Elisha Ely, Samuel Hubbard, Charles Christopher Trowbridge, Pliny Cutler, and Edmund Monroe – patented land in the area in 1833. They considered the site a prime location for industry, due to its potential for water power (since it straddled the Kalamazoo River) and water bound transportation. By 1835, a dam and sawmill had been established.

In 1886, a one-lane bridge was built over the Kalamazoo River to connect limited highway M-89 to the downtown area. The bridge fell into disrepair and was going to be removed until a group of activists raised the money to restore the bridge in 1983. Now a highlight of Allegan, the one-lane bridge is used in the city logo and is considered an important part of the city.

In 1914, Allegan entered the automobile (race car) industry as the manufacturing site of Howard E. Blood and Louis Chevrolet's unique chain-drive Cornelian automobile. The venture was short-lived, however, with fewer than 100 Cornelians actually produced.

Allegan County is the 18th largest physical county in Michigan (at 827 square miles) and enjoys 25 miles (40 km) of Lake Michigan coastline. The City of Allegan, as the other towns and the county itself, enjoys numerous parks, natural areas and access to multiple opportunities for lake activities and water sports. Allegan's largest annual celebration, widely reputed as the largest county fair in Michigan, is the Allegan County Fair each September. Allegan's local newspaper, locally owned and in publication since 1858, is the Allegan County News.

This climatic region is typified by large seasonal temperature differences, with warm to hot (and often humid) summers and cold (sometimes severely cold) winters. According to the Köppen climate classification system, Allegan has a humid continental climate, abbreviated "Dfa" on climate maps. 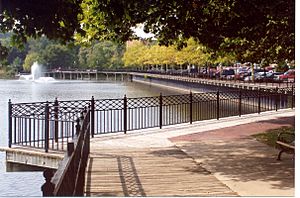 A longtime industrial town, Allegan's downtown waterfront fell into disrepair and environmental pollution by the late 1960s and early 1970s. The potential for loss of an aging iron bridge would cause the citizenry of Allegan to focus on community history, en masse, for an event that solidified Allegan's view toward community architectural preservation. The Second Street Bridge in Allegan is a whipple-trough truss bridge erected by the King Iron Bridge Company (Cleveland, Ohio) in 1886. Used as a two-lane bridge until discussions about its demise began in the 1970s, the City of Allegan experienced an unprecedented and consistent outcry not to demolish its most prominent downtown trademark. City planners often commented the downtown district would be better served by a more modern, two-lane structure, a common progressive view that has resulted in the demise of thousands of historic structures nationwide. As a result of community efforts and the successful application for federal grants, the Second Street Bridge was renewed for likely another century of service. The only noticeable modifications are the installation of wood in the decking of the bridge, reduction of traffic to one lane and the installation of traffic lights at both ends. Allegan received national recognition in the form of The National Historic Preservation Award, one of fifteen such recipients in the United States. Focus on preservation of the downtown business district and timeless residential homes has continued as a theme in Allegan since the two-year bridge restoration (1981–1983). 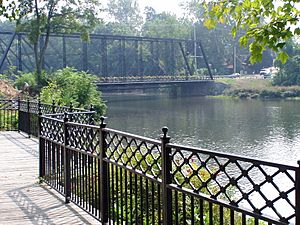 For several years in the late 1980s and 1990s, Allegan held a city festival called "Bridgefest" in honor of the Second Street Bridge. The "Old Iron Bridge", as it is referred to by residents, remains the most common logo and identifying characteristic of historic Allegan, Michigan. The Second Street Bridge served also as an ideal "second chance" for Allegan residents to gain footing against progressive construction. Faced with legitimate needs to modify or replace aging structures, Allegan also began taking inventory of its well-preserved architectural wealth. In 1953 the City of Allegan gave its unique architectural history a back seat to progress and demolished its then 65-year-old Richardsonian Romanesque styled courthouse. The previous courthouse, a magnificent structure incapable of meeting the growing office space needs of the city, was leveled in favor of a modern structure that serves as Allegan County's courthouse today. Many of Allegan's senior residents can recall the old courthouse with reverence, and vividly contrast apathy that consumed the courthouse with activism that saved the Old Iron (Second Street) Bridge.

Much of Allegan's historic architecture dates to an odd Civil War era windfall received by Union Army General Benjamin Dudley Pritchard. Pritchard's capture of Confederate States President Jefferson Davis in May 1865 led to a $100,000 bounty that would forever alter the Allegan residential district. Pritchard shared his reward with troops who, like Pritchard, chose to settle in Allegan. With financial gifts from Pritchard and the continued growth of Allegan as a center for business, the valuable downtown properties were populated with stately homes of impressive architecture. Many of these homes remain, with only minor modification, today. Owners of distinctive Allegan homes are often well-versed in the history of their houses, with stories passing from owner to owner, generation to generation. It is not uncommon to hear exactly which political power, war hero or business magnate stayed within the walls of these beautiful Allegan homes.

The downtown business district of Allegan falls among some of the best preserved small-town residential districts in America. Dozens of homes built in the 19th century and early 20th century remain much as they existed at their construction; homes with porches suitable for carriage ingress and egress are spectacularly preserved. Largely unchanged in layout for well over a century, the Allegan business district remains a unique presentation of shops, professional offices and yet another example of architectural community renewal.

The Regent Theatre opened in 1919 in what was formerly a late 19th-century horse livery. It originally not only showed movies, but presented vaudeville acts on its stage. In the 1930s, the Regent received an Art Deco facelift, including a cream-colored vitreous marble facade with red and green highlights. The six second-story windows have been closed up and covered with vitrolite with abstract decoration on them. The late Streamline era marquee, with its only decoration being a large white star, is lit with neon and light bulbs.

After decades entertaining the people of Allegan, the Regent closed in the early 1980s. It was threatened with demolition by 1990. The non-profit Old Regent Theatre purchased the theater the same year and restored it to its 1930s glory in 1996. In 1997, during a violent rainstorm, the roof collapsed causing massive damage just an hour after the last movie of the night let out. Since then, the Old Regent has been painstakingly rebuilt and restored once again, including recreating historic panels in the auditorium and the original 1930s carpeting. The building was rewired electrically, and new curtains were hung.

The original 20x30 foot screen was salvaged, but needed to be repaired. It is now one of the largest screens remaining in Michigan.

South Pacific was screened at the Old Regent's second grand-reopening in 1999. Along with first run films, the theater also shows classic films and has a children's matinee on Saturday and Sunday afternoons.

On September 13, 2007, the fully restored marquee was completed and Trowbridge St. now glows under the colorful neon of the beautifully restored Art Deco masterpiece.

Traditionally the Allegan Community Players have called The Griswold Auditorium home. The auditorium was built in 1929 through an $100,000 endowment left by the late Marilla Griswold and has remained virtually unchanged ever since its completion.

In the summer of 2008 the group was reinvigorated when they produced Broadway the Big Picture. With a cast of over 50, including performers of all ages, the players regained their place in the community as an outlet and teaching module for all ages.

Allegan maintains a comprehensive 24-hour hospital system (Allegan General Hospital) and is served in community policing by both City of Allegan police and the Sheriff's Department of Allegan County, also headquartered within the Allegan City limits. The County of Allegan comprises 24 incorporated townships, most maintaining their own system of city schools, emergency services and local law enforcement.

All content from Kiddle encyclopedia articles (including the article images and facts) can be freely used under Attribution-ShareAlike license, unless stated otherwise. Cite this article:
Allegan, Michigan Facts for Kids. Kiddle Encyclopedia.