Fieldville is a historical unincorporated community located within Piscataway Township in Middlesex County, New Jersey, United States. The location is sometimes described as being on River Road south of Bound Brook. The community was named after John Field and his descendants who settled the area.

The original Field House, built by John Field in 1710, was located between River Road and the Raritan River. It was destroyed in 1907. 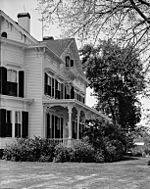 About 1868, Benjamin McDowell Field built a large two-story frame house along River Road. It was also known as the Kenneth Perry House, named after its last owner. The house was destroyed by fire in 1965.

As part of the Delaware and Raritan Canal, a dam was constructed on the Raritan River at Fieldville to supply water for the last five miles of the canal to New Brunswick.

All content from Kiddle encyclopedia articles (including the article images and facts) can be freely used under Attribution-ShareAlike license, unless stated otherwise. Cite this article:
Fieldville, New Jersey Facts for Kids. Kiddle Encyclopedia.