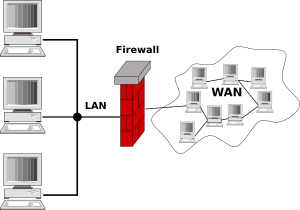 A Firewall protects a number of computers on a LAN against unauthorised access.

Outside of computer security, a firewall is a wall built to stop (or slow down) the spread of a fire. In terms of computer security, a firewall is a piece of software. This software monitors the network traffic. A firewall has a set of rules which are applied to each packet. The rules decide if a packet can pass, or whether it is discarded. Usually a firewall is placed between a network that is trusted, and one that is less trusted. When a large network needs to be protected, the firewall software often runs on a computer that does nothing else.

A firewall protects one part of the network against unauthorized access.

Data travels on the internet in small pieces; these are called packets. Each packet has certain metadata attached, like where it is coming from, and where it should be sent to. The easiest thing to do is to look at the metadata. Based on rules, certain packets are then dropped or rejected. All firewalls can do this.it is known as network layer

In addition to the simple packet filtering (above) this kind of firewall also keeps track of connections. A packet can be the start of a new connection, or it can be part of an existing connection. If it is neither of the two, it is probably useless and can be dropped.

Application-layer firewalls do not just look at the metadata; they also look at the actual data transported. They know how certain protocols work, for example FTP or HTTP. They can then look if the data that is in the packet is valid (for that protocol). If it is not, it can be dropped.

Other things firewalls are used for

Firewalls can provide a secure connection between two networks. This is called tunnelling. The data may be encrypted. It is unencrypted at the other end. Since the firewalls are doing this, the rest of the network is unaware of it. An alternative is to provide a secure access (to the corporate network).

In general, there are two types of firewalls:

What firewalls cannot protect against

All content from Kiddle encyclopedia articles (including the article images and facts) can be freely used under Attribution-ShareAlike license, unless stated otherwise. Cite this article:
Firewall (networking) Facts for Kids. Kiddle Encyclopedia.